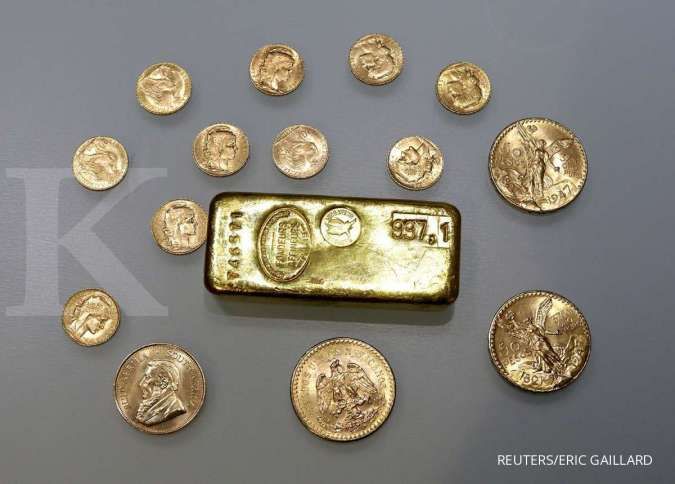 ILUSTRASI. Gold hit a more than two-week high on Friday, as the dollar took a breather.

KONTAN.CO.ID - JAKARTA. Gold hit a more than two-week high on Friday, as the dollar took a breather after U.S. jobs data came in well below expectations, casting doubts about an immediate start to tapering by the Federal Reserve.

U.S. employment increased far less than expected in September, but hiring could pick up in the months ahead as COVID-19 infections subside.

The dollar eased after the data, making gold cheaper for other currency holders.

"Gold has seen a good gain as this data reduces the likelihood that we'll be seeing tapering in November," independent analyst Ross Norman said, adding, "it's also encouraging to see silver joining the party, and that would give gold bulls some confidence."

Bullion is on the front foot, quickly looking to challenge $1,785 an ounce, TD Securities analysts wrote in a note, adding, "while the taper is a foregone conclusion, there could be some short covering following aggressive flows associated with the pricing of a November Fed exit."

Fed Chair Jerome Powell had said it would take one more "decent" jobs report to set the process in motion for a reduction in U.S. central bank's $120 billion in monthly bond purchases.

But "for the gold narrative to really pickup again, we'd need an impulsive rally above $1,950-60, or the 'pre-COVID-19 vaccine highs' and that would require a significant catalyst not in the market right now," said a New-York based precious metals trader.