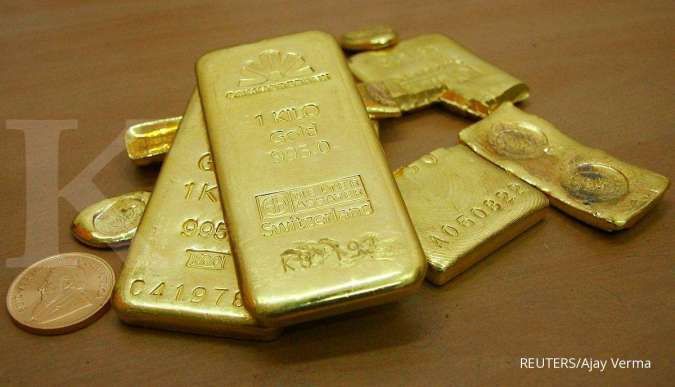 ILUSTRASI. Gold slipped to its lowest in more than two weeks on Friday, weighed down by a stronger dollar.

KONTAN.CO.ID - JAKARTA. Gold slipped to its lowest in more than two weeks on Friday, weighed down by a stronger dollar, while investors awaited U.S. non-farm payrolls data for May as bets over possible tapering of stimulus measures by the Federal Reserve loom.

"A much stronger dollar, a rise in U.S. Treasury yields along with a combination of generally overbought conditions in gold led to a rather decent sell-off," ED&F Man Capital Markets analyst Edward Meir said.

"We also had hints from the Fed that it could be opening up to the possibility of tightening. We still are constructive on gold and see some buying if the declines continue."

The dollar index jumped to a three-week high against its rivals, making gold more expensive for holders of other currencies, while the benchmark 10-year yield rose to 1.63%.

Data on Thursday showed the number of Americans filing new claims for unemployment benefits dropped below 400,000 last week, while U.S. private employers stepped up hiring in May.

The United States is weathering the pandemic and beginning to make progress toward full employment and 2% inflation, Fed Bank of Dallas President Robert Kaplan said.

All eyes are on U.S. jobs data due later in the day, for more cues on labour market recovery in the world's biggest economy and near-term policy action from the Fed.

Spot gold may rise into a range of $1,886-$1,898 per ounce, as it may have completed a correction around a support at $1,853, according to Reuters technical analyst Wang Tao.

Elsewhere, silver slipped 0.5% to $27.31 per ounce and was on track for the biggest weekly fall since late March.