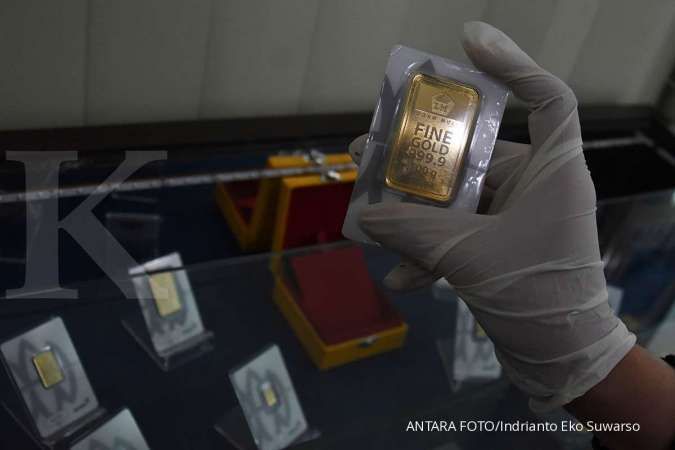 ILUSTRASI. Gold prices supported by a weaker dollar and expectations that the U.S. Federal Reserve will adopt a dovish stance.

KONTAN.CO.ID - JAKARTA. Gold prices rose on Monday, supported by a weaker dollar and expectations that the U.S. Federal Reserve will adopt a dovish stance at its two-day monetary policy meeting later this week. Spot gold was up 0.4% at $1,949.92 per ounce by 0309 GMT, adding to the previous week's 0.2% gain.

U.S. gold futures climbed 0.6% to $1,958.60. "The gold market is leaning towards the Fed's (policy)," said Stephen Innes, chief market strategist at AxiCorp, adding that the U.S. central bank might not change the current narrative, but there was a strong belief in the market that it would be able to trigger inflation.

The lower interest rate environment and long-term expectations that the Fed is going to increase quantitative easing and weaken the dollar are supporting gold prices, he added. The dollar index eased 0.1% against its rivals, with focus on the Fed's policy announcement on Wednesday.

A weaker dollar makes gold less expensive for holders of other currencies. Market participants are also waiting for the Bank of Japan and the Bank of England's policy decisions, due on Thursday. Major central banks have rolled out unprecedented stimulus measures and kept interest rates low, driving gold to new highs because of its role as a hedge against inflation and currency debasement.