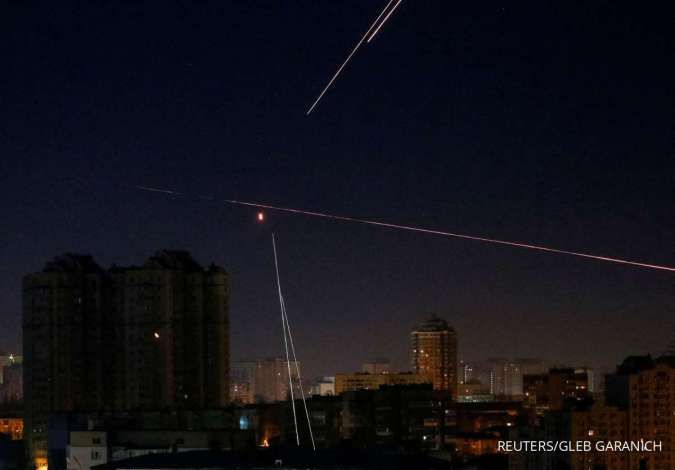 ILUSTRASI. Tracers are seen in the night sky as Ukrainian servicemen fire on the drone as Russia's attack on Ukraine continues, in Kyiv. REUTERS/Gleb Garanich

KONTAN.CO.ID - TOKYO. Sanctions imposed on Russia could prod more countries like China to look at central bank digital currencies (CBDC) as a tool to counter the dollar's dominance in the global financial system, former Bank of Japan executive Hiromi Yamaoka said on Wednesday.

While sanctions using financial infrastructure are necessary in extreme cases like the Ukraine crisis, they are "emergency means" that should not be over-used, said Yamaoka, who is well versed in CBDC and global settlement affairs.

U.S. allies including Japan imposed a series of sanctions against Russia for invading Ukraine on Feb. 24, including the freezing of the central bank's foreign assets and the removal of many Russian banks from the global payments system SWIFT.

"The most effective, powerful weapon was the freezing of Russia's foreign reserves," said Yamaoka, former head of the BOJ's payment and settlement systems department.

"It meant U.S. allies intentionally created a situation that pushes Russia into default," he told Reuters.

Yamaoka said it was unlikely crypto-currencies would serve as a useful loophole against sanctions for Russia, as they are too risky as a means to transfer huge amounts of funds.

But the Western sanctions on Russia underscored how politics and national security are increasingly affecting the world of finance including digital currencies, he said.

China's rapid progress in developing a digital yuan has alarmed some lawmakers in G7 advanced economies as a potential threat against the U.S. dollar's global hegemony.

"There's a chance a country like China could promote usage of digital yuan for cross-border transactions and create a currency bloc" to counter the dollar's dominance, Yamaoka said.

During his stint at the BOJ, Yamaoka was directly in charge of the central bank's research on digital currencies including a joint experiment with the European Central Bank. He now chairs a group of banks and companies looking at building a common settlement infrastructure for digital payments.