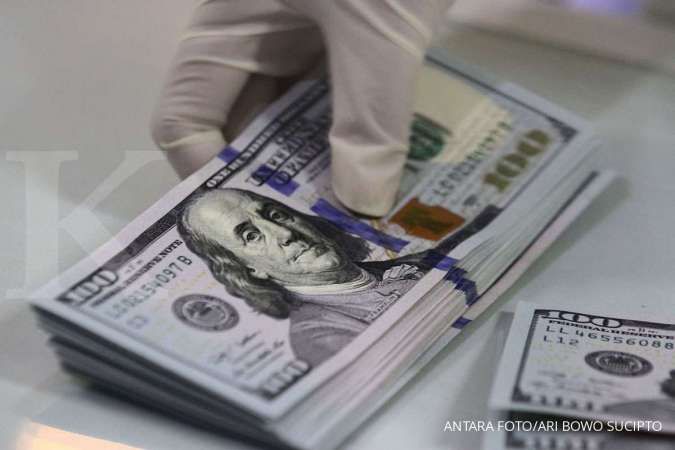 ILUSTRASI. the greenback is on track for its biggest weekly gains in almost a half year

KONTAN.CO.ID - TOKYO. The U.S. dollar dipped from a two-month peak on Friday as renewed hopes of fresh U.S. stimulus eased investors' concerns about its economic recovery, while the Chinese yuan gained after the country was added to a global bond benchmark.

Still, the greenback is on track for its biggest weekly gains in almost a half year, with investors not convinced if the dollar's uptrend -- and correction in risk assets that has driven it -- has run its course.

"I personally think the dollar's rise and risk-off trade could continue. The U.S. news coverage is getting dominated by the election. Political uncertainties are likely to weigh on the markets," said Kazushige Kaida, head of FX Sales at State Street Bank's Tokyo Branch.

"That also relates to whether there will be another economic package. No one expects a deal before the election but the economy does need some kind of help by the end of year as Fed officials have said lately."

The latest data showed the number of Americans filing new claims for unemployment benefits unexpectedly increased last week in a sign the economic recovery was running out of steam as coronavirus infections and deaths continue to climb.

The dollar index moved little in Asia on Friday at 94.351 . After hitting a two-month high of 94.601 in Thursday's U.S session, the dollar retreated as stock prices got a lift on hopes that stalled U.S. stimulus talks could resume.

The index is up 1.4% this week, however, and there remain doubts over whether the U.S. can overcome divisions to agree on a package.

Further complicating the political landscape, U.S. president Donald Trump has said he would unveil his choice to replace the late Supreme Court Justice Ruth Bader Ginsburg on Saturday, a move that has drawn sharp battle lines between Republicans and Democrats.

Investors are also on edge after Trump refused to commit to a peaceful transfer of power if he lost the election.

Rises in U.S. real yields have also underpinned the dollar. The yield on 10-year U.S. inflation-protected Treasuries rose to minus 0.911%, the highest since late July.

The yuan gained, stemming its decline over the past week or so, after FTSE Russell announced it will add Chinese government bonds to its flagship World Government Bond Index (WGBI) starting in 2021.

"Foreign ownership of Chinese government bonds has picked up steadily. The inclusion in the WGBI benchmark will prompt additional foreign flows into the Chinese bond market and support the yuan," said Kevin Xie, China economist at the Commonwealth Bank in Sydney.

The renminbi traded at 6.8122 per dollar, up slightly on the day in the onshore market. It has gained around 5% from its lows in May.