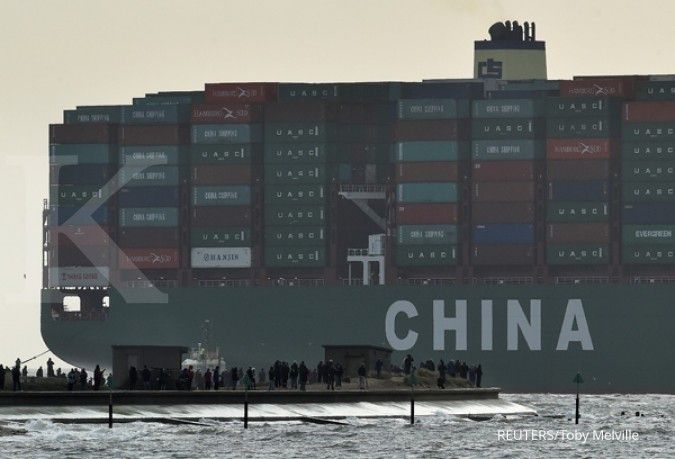 ILUSTRASI. Outbound shipments in September jumped 28.1% from a year earlier, up from a 25.6% gain in August.

KONTAN.CO.ID - BEIJING. China's export growth unexpectedly accelerated in September, as still solid global demand offset some of the pressures on factories from power shortages, supply bottlenecks and a resurgence of domestic COVID-19 cases.

The world's second-largest economy has staged an impressive rebound from the pandemic but there are signs the recovery is losing steam. Problems including falling factory activity, persistently soft consumption and a slowing property sector have dimmed China's economic outlook.

Outbound shipments in September jumped 28.1% from a year earlier, up from a 25.6% gain in August. Analysts polled by Reuters had forecast growth would ease to 21%.

"We expect the power rationing from mid-September has yet to impact exports," said Ting Lu, Nomura's chief China economist.

Lu said a high base of comparison and falling demand for durable goods, as more countries spend on services as they adopt a living-with-COVID-19 strategy, will also be dampening factors.

"We expect the headline year-on-year export growth to first moderately slow in October and then drop significantly in November and December to around 10%."

Power shortages caused by a transition to clean energy, strong industrial demand and high commodity prices, have halted production at numerous factories including many supplying firms such as Apple and Tesla since late September.

Furthermore, the property sector, a key driver of growth, is reeling from the increasing defaults of Chinese developers, with real estate sales tumbling and new construction starts slowing.

"Given the large increase in import prices, that means import volumes were down on a year ago last month as demand in China's economy slowed considerably," said Louis Kuijs, head of Asia economics at Oxford Economics.

The volume of coal imports in September rose to their highest this year as power plants scrambled for fuel to boost electricity generation to ease the power crunch and replenish inventories ahead of the winter heating season.

Natural gas imports in September also rose to their highest since January this year.

Many analysts are expecting the central bank to inject more stimulus by cutting the amount of cash banks must hold as reserves later this year to help small and medium-sized enterprises.

China's trade surplus with the United States rose to $42 billion, Reuters calculations based on the customs data showed, up from $37.68 billion in August.

Last week, top trade officials from the United States and China reviewed the implementation of the U.S.-China Economic and Trade Agreement.

The United States has been pressing China to hold its commitments under a 'Phase 1' trade deal which has eased a long running tariff war between the world's two largest economies. The Phase 1 deal is due to expire at the end of 2021.