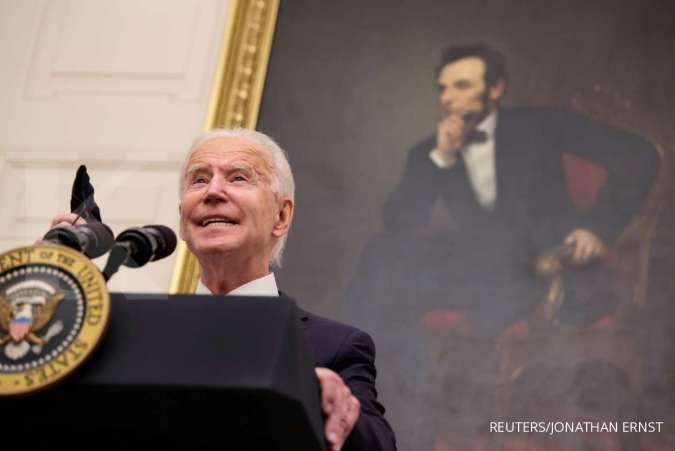 KONTAN.CO.ID - WASHINGTON. U.S. President Joe Biden signed an order on Monday barring most non-U.S. citizens who have recently been in South Africa from entering the United States, effective Saturday.

Biden's order also reimposes an entry ban, set to expire on Tuesday, on nearly all non-U.S. travelers who have been in Brazil, the United Kingdom, Ireland and 26 countries in Europe that allow travel across open borders. Last week, then-U.S. President Donald Trump revoked those restrictions which were imposed last year effective Tuesday.

"With the pandemic worsening and more contagious variants spreading, this isn't the time to be lifting restrictions on international travel," White House spokeswoman Jen Psaki said at a news briefing.

South Africa's Foreign Ministry did not immediately provide a comment.

Some health officials are concerned current vaccines may not be effective against the South Africa COVID-19 variant, which also raises the prospect of re-infection.

South Africa's 501Y.V2 variant is 50% more infectious than the regular strain and has been detected in at least 20 countries.

Centers for Disease Control and Prevention director (CDC) head Rochelle Walensky is now expected to sign a separate order Tuesday requiring masks on all airplanes and public transportation for all travelers aged 2 and older, officials told Reuters. The order was originally set to be signed Monday,

The Transportation Security Administration is expected this week to issue a separate security directive related to masks, people briefed on the matter said.

On Tuesday, new CDC rules take effect requiring all international air travelers aged 2 and older to present a negative coronavirus test taken within three calendar days of travel or proof of recovery from COVID-19 to enter the United States.

The CDC said on Jan. 12 it would not grant temporary waivers to airlines to exempt some travelers from countries with limited testing capacity. Numerous U.S. airlines last week sought waivers.

The State Department and CDC on Monday again urged U.S. citizens to "reconsider travel abroad, and postpone all non-essential travel."

The State Department said in a statement Americans could "have difficulty accessing a test. ... What plan do you have to ensure you can get a test that meets the requirement in order to come home on time?"