Australia may see first week of no local Covid-19 transmissions 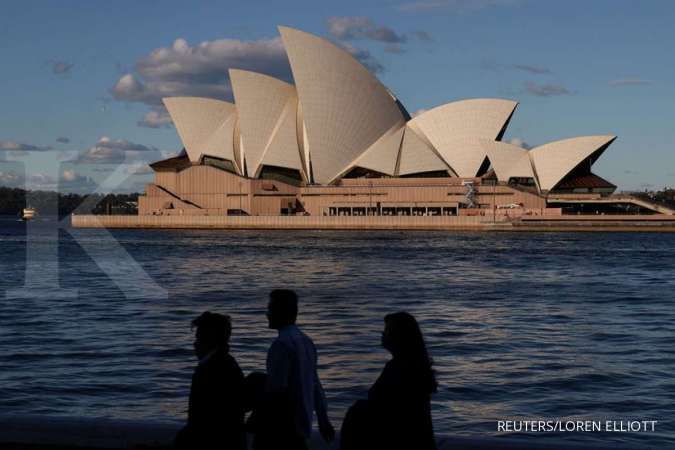 ILUSTRASI. People walk in front of the Sydney Opera House following the easing of restrictions implemented to curb the spread of the coronavirus disease (COVID-19) in Sydney, Australia, June 23, 2020. REUTERS/Loren Elliott

KONTAN.CO.ID - MELBOURNE. Australia's three most populous states on Saturday recorded at least a week with no local transmissions of the new coronavirus, boding well for the country's recovery from the pandemic after a flare-up marred an impressive early response.

Victoria, the epicentre of the resurgence of the virus in recent months, recorded its 15th consecutive day of no new infections and no related deaths, two weeks after the state emerged from one of the world's longest and strictest lockdowns.

The second-most populous state's deputy chief health officer, Allen Cheng, told a news conference that the run of zero cases was "about as good as it can get".

Neighbouring New South Wales, the most populous state, saw seven days without local transmissions, while Queensland has had no new community infections for two months. Both states saw a handful of new cases in managed quarantine among travellers from overseas.

This latest data may mean Australia can record its first week of no local transmissions since the start of the pandemic as the rest of the country has not seen any cases for weeks or months.

Australia's swift closure of borders and strict, economically costly measures kept the pandemic largely from spreading, but a resurgence in July in Victoria sent the state into a harsh 111-day lockdown that ended in late October.

Victorians still must wear masks and public gatherings are limited, but more easing is expected in a week. Western Australia, which had its borders closed to the rest of the country for seven months, had them reopened on Saturday.

The country has seen just over 27,700 cases of the new coronavirus cases since the start of the pandemic - about the daily number of illnesses recorded in the United Kingdom in recent days. Australia has recorded 907 COVID-19 deaths.