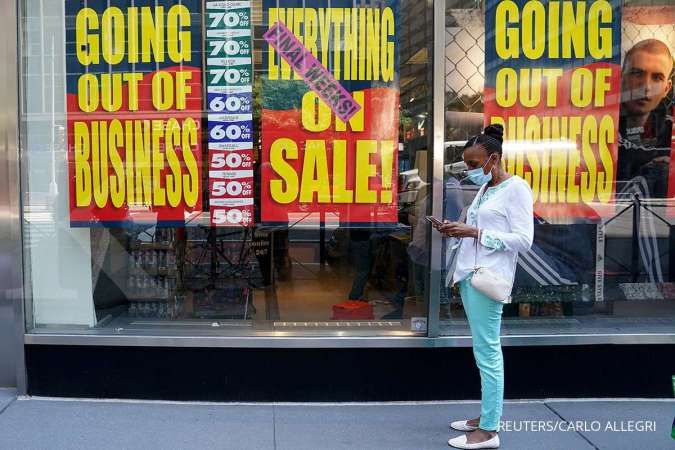 ILUSTRASI. People walk past a business that is closing following the outbreak of the coronavirus disease (COVID-19) in the Manhattan borough of New York City, New York, U.S.

KONTAN.CO.ID - WASHINGTON. A senior adviser to President-elect Joe Biden said on Friday there were no plans for nationwide lockdowns on commerce or social life to curb the surging coronavirus pandemic, even as three U.S. West Coast states jointly called for a halt in non-essential travel.

The advisory from California, Oregon and Washington urging the public to indefinitely avoid out-of-state travel unless necessary came as cities and states across the country moved to re-impose restrictions to tame alarming new spikes in COVID-19 infections and hospitalizations.

That patchwork of state and localized measures, many of them announced this week, is likely to remain in place after Biden, the Democratic former vice president, is inaugurated on Jan. 20 following his election defeat of Republican President Donald Trump.

"Right now the way we should be thinking about this is more like a series of restrictions that we dial up or down depending on how a bad spread is taking place in a specific region," he said.

The governors of six Northeastern states have scheduled an emergency meeting this weekend to coordinate their responses to surge of infection, New York Governor Andrew Cuomo said.

"We believe we're going to have to be taking additional steps, and to the extent we can share information and align action, we’ll do that,” Cuomo said in a conference call with reporters.

Announcing the travel advisory in Sacramento, California Health and Human Services Secretary Dr. Mark Ghaly said the three states decided against a mandatory restriction because of concerns "COVID-fatigue" or "COVID-resentment" might spark a backlash leading people to behave in ways that are less safe.

The advisory also urges individuals entering or returning to the West Coast from outside the three states to self-quarantine for 14 days, believed to be the maximum incubation period for the virus that causes COVID-19.

The action was announced a day after California became the second state, after Texas earlier this month, to see its tally of confirmed coronavirus infections to date top 1 million, with its daily average of new cases jumping by nearly 50% in the first week of November.

"This is the fastest rate of rise we have seen in California," said Dr. Erica Pan, the state's acting health officer and chief epidemiologist.

Among new restrictions announced elsewhere this week, Chicago urged residents to stay at home and shun visitors for the next 30 days, including the Thanksgiving holiday in late November. In New York City, restaurants were ordered to close for indoor dining at 10 p.m. beginning on Friday, and classroom instruction in schools may be halted again.

Dr. Anthony Fauci, the top U.S. infectious disease expert serving on the Trump's coronavirus task force, said on Thursday that he had had no contact with Biden's transition team, but his advice for them would be the same as it is for Trump: social distancing, avoiding crowds, wearing masks, washing hands.

"Public health principles don't change from one month to another or from one administration to another," he said in an interview.

Surges in COVID-19 infections are alarming officials across the United States, with more than 100,000 new cases detected each day. The country has reported a seven-day rolling average of more than 1,000 deaths in the past six consecutive days, a trend last seen in August.

The number of COVID-19 cases reported daily more than doubled in 13 states over the past two weeks, most of them in the Midwest, led by Iowa, Minnesota, Michigan and Illinois, according to a Reuters tally of figures from U.S. public health agencies.