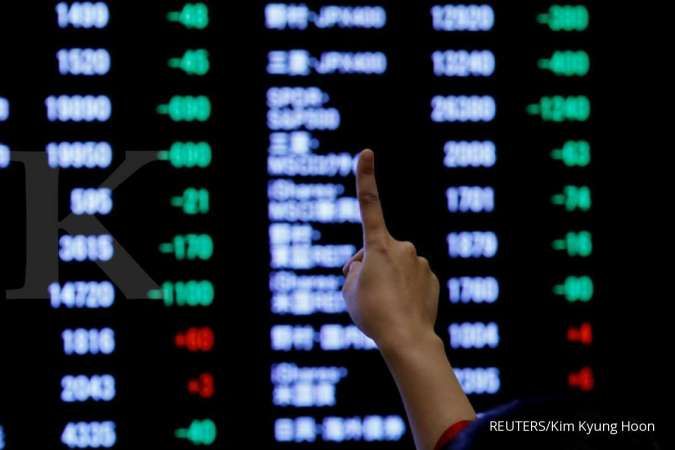 ILUSTRASI. A woman points to an electronic board showing stock prices as she poses in front of the board after the New Year opening ceremony at the Tokyo Stock Exchange (TSE), held to wish for the success of Japan's stock market, in Tokyo, Japan, January 4, 2019.

KONTAN.CO.ID - SHANGHAI. Asian shares kicked off 2020 on a strong note on Thursday, spurred by Chinese markets after Beijing eased monetary policy to support the slowing economy.

Investors also cheered news that the United States and China will sign a trade pact soon after months of volatile negotiations between the world's two largest economies.

European equities were set to follow Asia higher in their first trading session of the new decade. Pan-region Euro Stoxx 50 futures rose 0.62% and FTSE futures were up 0.31%, though German DAX futures fell 0.18%.

MSCI's broadest index of Asia-Pacific shares outside Japan rose 0.43%, after rising 5.6% in December.

U.S. President Donald Trump said on Tuesday that Phase 1 of trade deal with China would be signed on Jan. 15 at the White House, though uncertainty surrounds details about the agreement.

Rising hopes for a resolution to the U.S.-China trade war helped propel global equities to record highs late last year and depressed the value of the U.S. dollar.

Investors were cheered after China's central bank on Wednesday said that it would cut the amount of cash that banks must hold as reserves, releasing around 800 billion yuan ($114.9 billion) in funds for lending, effective Jan. 6.

Though China's economy has started to show some signs of bottoming out, analysts say it is not out of the woods yet and expect further growth boosting moves in coming months.

"I think the monetary angle in terms of what it means for the companies, is not that important," said Jim McCafferty, head of Asia ex-Japan equity research at Nomura in Hong Kong.

"However, for what it means from the consumer point of view, then clearly if there's easy money and ... individuals can borrow cheaply and repay debt quickly, then that of course is going to help the economy and the companies."

McCafferty said a recovery in memory chips and new handset development prompted by the rollout of 5G mobile technology could help lift tech-heavy equity markets like South Korea and Taiwan this year.

Australian shares flicked between small gains and losses before ending up 0.1%. Seoul's Kospi lost 0.85%, while shares in Taiwan added 0.86%.

Markets in Japan were closed for a national holiday.

The gains in Asia followed a bullish end to the year on Wall Street on Tuesday. The Dow Jones Industrial Average rose 0.27% and the S&P 500 gained 0.29%. The Nasdaq Composite added 0.3%.

In currency markets, the dollar was slightly stronger against major peers, but gains were capped as investors continued to expect a better outlook for global growth and trade as well as an end to U.S. economic outperformance.

Gold, which has benefited from a weaker greenback, was up 0.23% on the spot market despite the slightly strong dollar. It last fetched $1,520.37 per ounce.