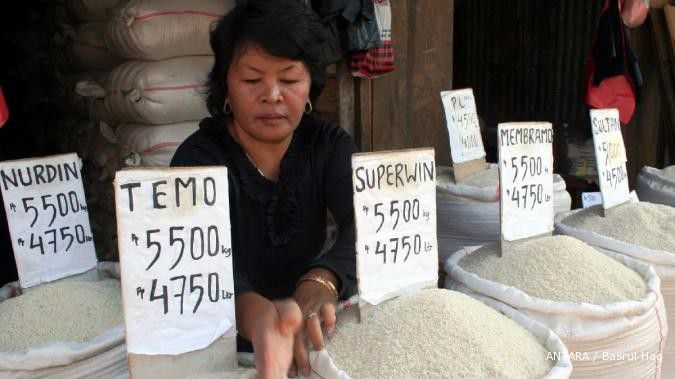 ILUSTRASI. Banjir China. China Daily/via REUTERS ATTENTION EDITORS - THIS IMAGE WAS PROVIDED BY A THIRD PARTY. EDITORIAL USE ONLY. CHINA OUT.

BOGOR. Agriculture Minister Suswono has launched food products made from local plants that have been developed by the Bogor Agricultural Institute (IPB) to support food diversification.

“We don’t need to worry about food scarcity because we have an abundance of natural and human resources. What we need now is more innovation as the number of fields for agriculture is limited,” he said during the launch at the campus on Saturday.

Researchers at the IPB have produced food products that have been processed to have similar characteristics to food made from rice.

By adding fiber, antioxidant substances or other ingredients, the artificial rice that can be made from corn, sorghum, sago and tubers is ideal for a customized diet.

The researchers describe the products as “analog rice” because they have analogous characteristics to conventional rice.

Suswono said that with such innovations, the archipelago had no reason to worry about food shortages, especially when extreme weather occurred.

Slamet Budijanto, the IPB’s director of agriculture technology and one of the product researchers, said that analog rice had made it to the 2011 list of 103 innovations in the country and had also received an award from the West Java administration.

“We hope in the future for private-sector involvement in the production of analog rice to support national food sustainability,” he said.

Slamet said that two months ago, Depok administration had ordered 250 kilograms of the artificial rice, adding that soon the West Java administration would also order it.

The advantages of artificial rice are that it can be cooked through both conventional and modern means, and people do not need to wash it before use.

But the price is still expensive, ranging from Rp 9,000 (99 US cents) to Rp 14,000 per liter, depending on the ingredients used to make the rice. Due to its cost, the product is aimed at middle-to-upper class consumers.

Such a product had previously been studied by several other universities and research centers in China and the Philippines.

Indonesia, the world’s third-largest rice producer after China and India, with a population of 240 million, annually consumes 139 kilograms per capita. But it has been unable to maintain self-sufficiency and relies a lot on imports of the staple food as stockpiles have fallen and harvests failed to meet targets.

The government has set a target of a surplus of 10 million tons of rice in 2014 as part of the rice-self sufficiency program it launched several years ago.