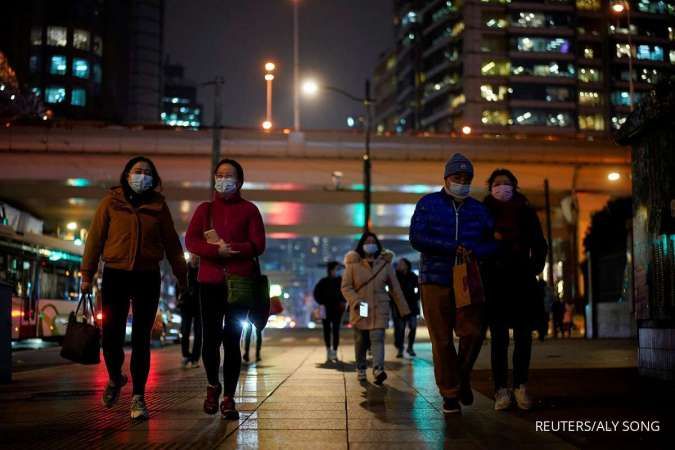 KONTAN.CO.ID - BEIJING. The Chinese port city of Tianjin reported an increase in COVID-19 infections on Thursday (Jan 13) as it stepped up efforts to rein in an outbreak that has spread the highly transmissible Omicron variant to another Chinese city.

Omicron has brought fresh challenges to China's strategy to quickly extinguish local outbreaks, an approach that has taken on extra urgency in the run-up to the Winter Olympics starting on Feb 4, as well as the Chinese New Year holiday peak travel season beginning later this month.

Tianjin, located in northern China around 100km from the capital Beijing, reported 41 domestically transmitted infections with confirmed symptoms on Wednesday, up from 33 a day earlier, data from the National Health Commission showed on Thursday.

The northeastern city of Dalian also reported that an individual arriving from Tianjin had also contracted the Omicron variant, state television said late on Wednesday.

Anyang in central China's Henan province reported 43 local symptomatic cases on Wednesday compared with 65 a day earlier. The city said on Monday it detected two Omicron infections and that the current flare-up could be traced back to a student arriving from Tianjin.

Case numbers in Tianjin and Anyang are tiny compared with outbreaks in many other countries, and the total number of local Omicron infections remains unclear. Still, they imposed varying degrees of restrictions on movement within the cities and out of town.

Across China, several cities have ordered quarantine for anyone who has recently visited Tianjin or Anyang.

Many cities, including Beijing, are encouraging people to stay put during the Chinese New Year holiday, typically the busiest time of year for travel.

Citing the risk posed by Omicron and the need to ensure the Olympics Games are safe, the Beijing city government also encouraged commuters from satellite towns to work from home in a statement issued on Thursday.

In total, mainland China reported 124 locally transmitted symptomatic cases for Wednesday, compared with 166 a day earlier. A few other cities in Henan, the northwestern Xian city and the southern Shenzhen also reported new cases for Jan 12.

As of Jan 12, mainland China had 104,379 confirmed cases, including both local ones and people arriving from abroad, since the pandemic first erupted over two years ago.

There were no new deaths, leaving the death toll at 4,636.