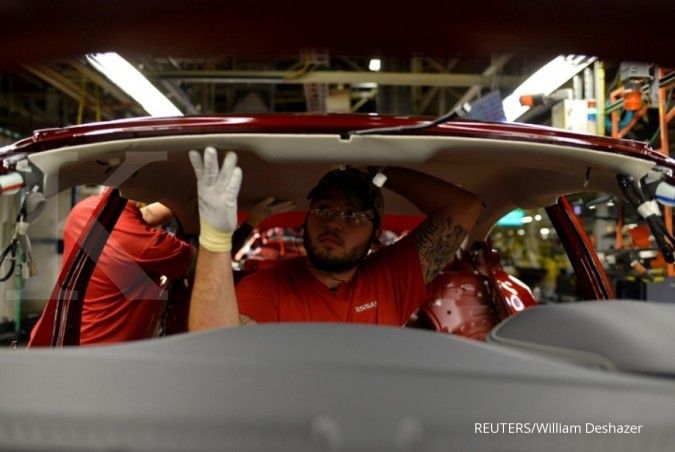 ILUSTRASI. Production at U.S. factories dropped for a second straight month in June.

KONTAN.CO.ID - WASHINGTON. Production at U.S. factories dropped for a second straight month in June as output of motor vehicles and a range of other goods declined, suggesting that higher interest rates were hurting the manufacturing sector.

It rose at a 4.2% annualized rate in the second quarter, accelerating from the January-March quarter's 3.9% growth pace. Manufacturing, which accounts for 11.9% of the U.S. economy, has been supported by strong demand for goods.

But spending is gradually shifting back to services and retailers are sitting on excess inventory. A strong dollar as a result of tighter monetary policy could make U.S. exports more expensive. The U.S. central bank has hiked its policy interest rate by 150 basis points since March. It is expected to raise its benchmark overnight interest rate by another 75 basis points this month.

Mining production increased 1.7%, continuing to be boosted by oil and gas extraction as the war in Ukraine keeps crude prices high. Utilities output fell 1.4% after rising 1.9% in May. The declines in utilities and manufacturing output outweighed the rise in mining, pushing overall industrial production down 0.2%.

Read Also: Citi, Goldman and BofA in Talks With Rwgulators Over Texting Fine

Industrial output was unchanged in May. It grew at a 6.1% rate in the April-June quarter after increasing at a 5.1% pace in the first quarter.

Capacity utilization for the manufacturing sector, a measure of how fully firms are using their resources, fell 0.5 percentage point to 79.3% in June. It is 1.1 percentage points above its long-run average. Overall capacity use for the industrial sector slipped to 80.0% last month from 80.3% in May. It is 0.4 percentage point above its 1972-2021 average.

Officials at the Fed tend to look at capacity use measures for signals of how much "slack" remains in the economy - how far growth has room to run before it becomes inflationary.