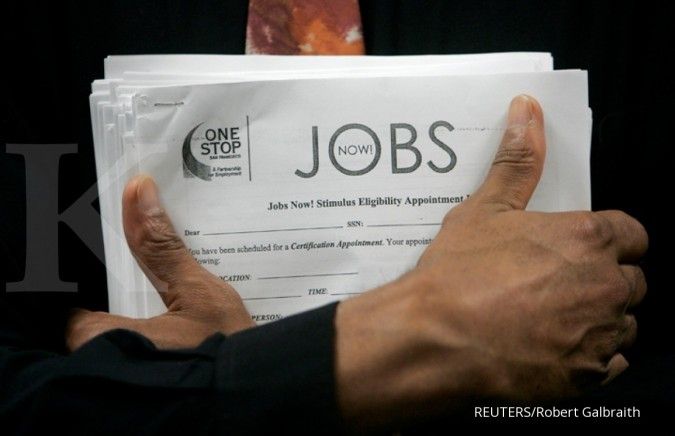 ILUSTRASI. A man carrying a stack of job listings listens to a discussion at the One Stop employment center in San Francisco, California.

The weekly unemployment claims report from the Labor Department on Thursday, the most timely data on the economy's health, also showed state jobless benefits rolls declining to their lowest level since 1969 in the second-half of May.

The Federal Reserve's aggressive monetary policy stance as it fights high inflation has fanned fears of a recession. While other data on Thursday showed private payrolls rose far less than expected in May, that was most likely because of worker shortages. There were over 11 million job openings at the end of April. The U.S. central bank is trying to dampen demand for labor, without pushing the unemployment rate too high.

"Job gains across the country are slowing, but few workers are actually losing their jobs," said Christopher Rupkey, chief economist at FWDBONDS in New York. "This isn't a soft-landing or a hard-landing for the economy yet. No sign of company layoffs means the labor market isn't loosening up as much as Fed officials were hoping."

Initial claims for state unemployment benefits fell 11,000 to a seasonally adjusted 200,000 for the week ended May 28. Economists polled by Reuters had forecast 210,000 applications for the latest week.

There were big declines in claims in Pennsylvania, Kentucky, Georgia and Florida, which offset a jump in California, as well as notable rises in Mississippi and New York.

Claims have been largely treading water since hitting more than a 53-year low of 166,000 in March.

Demand for labor remains strong, though the Fed's Beige Book on Wednesday showed "one district explicitly reported that the pace of job growth had slowed," and that "some firms in most of the coastal districts noted hiring freezes or other signs that market tightness had begun to ease."

But the government also reported that there were 11.4 million job openings at the end of April. While the job-workers gap fell from 3.6% of the labor force in March, it remained very high at 3.3% in April.

The Fed's fight against inflation could be made harder by weak worker productivity. In another report on Thursday, the Labor Department confirmed that productivity fell at its steepest pace since 1947 in the first quarter, while growth in unit labor costs accelerated.

Economists say claims would need to rise above 300,000 to cool the hot jobs market. Labor market strength was reinforced by a third report from global outplacement firm Challenger, Gray & Christmas on Thursday showing layoffs announced by U.S.-based companies dropped 14.7% to 20,712 in May.

So far this year, employers have announced 100,694 job cuts, down 48% from the same period in 2021. That is the lowest recorded January-May total since Challenger began tracking monthly job cut announcements in 1993.

The ADP report is jointly developed with Moody's Analytics. It has, however, a poor record predicting the private payrolls count in the department's Bureau of Labor Statistics (BLS)employment report because of methodology differences.

"The ADP data suggest that job growth is slowing, which at a very high level is broadly in line with our expectations for the labor market," said Daniel Silver, an economist at JPMorgan in New York. "But we know that the ADP report is not always a reliable predictor of the BLS data, so it is not clear if the BLS data will be as weak as the ADP report's May print."

The government's closely watched employment report on Friday is expected to show strong job growth continued in May.

According to a Reuters survey of economists, nonfarm payrolls probably increased by 325,000 jobs last month. The economy created 428,000 jobs in April, marking 12 straight months of employment gains in excess of 400,000.