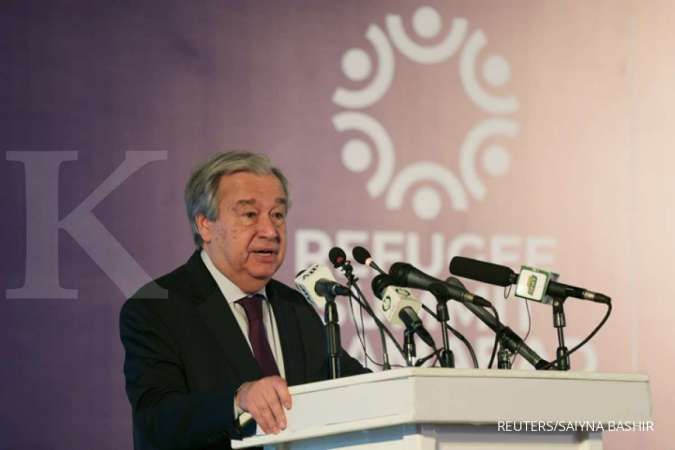 ILUSTRASI. United Nations Secretary General Antonio Guterres called for $35 billion more, including $15 billion in the next three months for the WHO programme.

KONTAN.CO.ID - ZURICH. United Nations Secretary General Antonio Guterres called for $35 billion more, including $15 billion in the next three months, for the World Health Organization's (WHO) "ACT Accelerator" programme to back vaccines, treatments and diagnostics against COVID-19.

Some $3 billion has been contributed so far, Guterres told an online event on Thursday, calling it "seed funding" that was less than 10% of what the WHO wants for the programme, formally called Access to COVID-19 Tools (ACT) Accelerator.

Financial support has, so far, lagged goals, as nations or governments including the European Union, Britain, Japan and the United States reach bilateral deals for vaccines, prompting Guterres and WHO General Director Tedros Adhanom Ghebreyesus to plead to nations to contribute.

"We now need $35 billion more to go from 'start up' to 'scale up and impact'," Guterres said in online remarks at a meeting of a council formed to help the ACT Accelerator gain traction. "There is real urgency in these numbers. Without an infusion of $15 billion over the next three months, beginning immediately, we will lose the window of opportunity."

"It is difficult to find a more compelling investment case. The European Commission will remain deeply and entirely committed to the success of the ACT Accelerator," von der Leyen said. "The world needs it, we all need it."

Tedros renewed calls for scaling up COVID-19 clinical trials. AstraZeneca this week suspended late-stage trials on its potential vaccine after an illness in a participant in Britain. Chief Executive Pascal Soriot said on Thursday if safety reviewers allow a restart, the company should still know by year's end if its vaccine works.