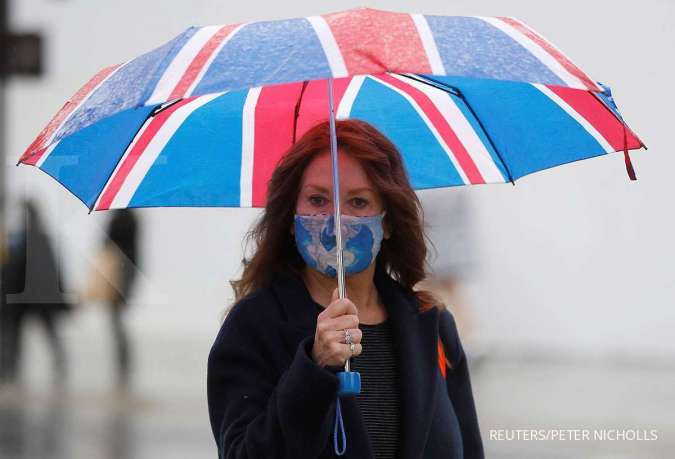 ILUSTRASI. A woman wearing a mask is seen on Oxford street, after new nationwide restrictions were announced during the coronavirus disease (COVID-19) outbreak in London, Britain, November 1, 2020.

KONTAN.CO.ID - LONDON. The United Kingdom's total death toll from COVID-19 surpassed 60,000 on Thursday, by the government's preferred measure of deaths within 28 days of a positive test.

The UK toll is the fifth highest in the world after the United States, Brazil, India and Mexico. It is the highest in Europe ahead of Italy and France.

Official daily data showed that 414 new deaths were reported on Thursday, taking the total since the start of the pandemic to 60,113.

The number of deaths over the past seven days was 3,085, down 5% compared with the previous seven days.

Until August, the United Kingdom was tallying its official COVID-19 death toll by a different measure, namely all deaths where the disease was mentioned on the death certificate. By that measure, the toll has now reached 69,752.

In terms of cases, a total of 14,879 new cases were reported across the United Kingdom on Thursday, taking the total over the past seven days to 100,857, down 17% compared with the previous seven-day period.

The total number of cases since the start of the pandemic stood at 1,674,134.

Italy reported a record 993 coronavirus-related deaths on Thursday, against 684 on Wednesday, and 23,225 new infections, compared with 20,709 the day before, the health ministry said.

The previous record number of deaths registered in a single day was 919 on March 27, at the peak of the first wave of the pandemic.

The first Western country hit by the virus, Italy has seen 58,038 COVID-19 fatalities since its outbreak emerged in February, the second highest toll in Europe after Britain's. It has also registered 1.665 million cases to date.

When Italy's second wave of the epidemic was accelerating fast in the first half of November, hospital admissions were rising by around 1,000 per day, while intensive care occupancy was increasing by about 100 per day.