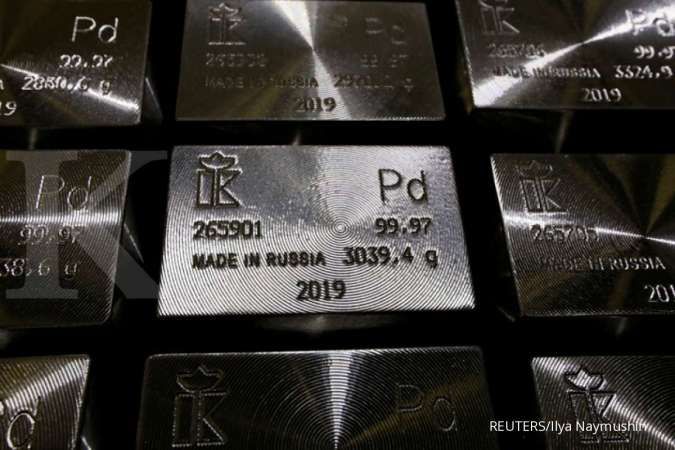 ILUSTRASI. Ingots of 99.97 percent pure palladium are stored at a plant owned by Krastsvetmet, one of the world's biggest manufacturers of non-ferrous metals, in Krasnoyarsk, Russia April 9, 2019.

"We're looking at pretty decent automotive and industrial use for this catalyst," said Bart Melek, head of commodity strategies at TD Securities, adding that with a very tight market projected, it would be difficult to source the metal.

Prices of palladium, used in catalytic converters to clean car exhaust fumes, have risen 24% since Russia's Nornickel , the world's largest producer, partly suspended operations at two of its mines on Feb. 24.

There might be technical price corrections but given the robust fundamentals for palladium, a big adjustment to the downside is highly unlikely, Melek said.

Elsewhere, spot gold hit a near two-month high at $1,797.41 per ounce, helped by subdued U.S. Treasury yields and a weaker dollar.

"Gold's pain over the last couple of months has been the rising Treasury yields and now that has pretty much been alleviated," said Edward Moya, senior market analyst at OANDA.

"The current outlook for the global economy is still mixed... You're going to see a much more cautious approach in the next quarter and that's probably going to see gold start to see some safe haven flows," Moya added.