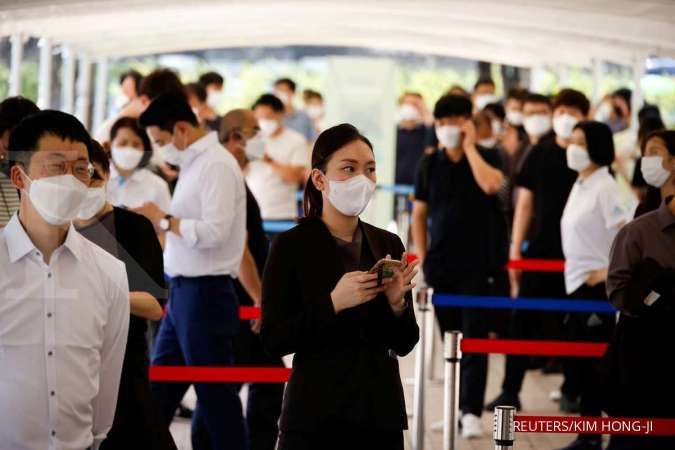 KONTAN.CO.ID - SEOUL. South Korea announced on Friday plans to expand its coronavirus vaccine rollout to people aged 18 to 49, as the country grapples with record high daily cases driven mostly by infections in the unvaccinated younger population.

South Korea has been struggling to boost its immunisation drive amid supply shortages and shipment delays, with about 36.5% of its 52 million people having received at least one dose, while just 14% are fully vaccinated.

It aims to immunise over 70% by September as it vaccinates the 18-49 year olds with Moderna or Pfizer /BioNTech's products in August, Korea Disease Control and Prevention Agency Director Jeong Eun-kyeong told a briefing.

The country's vaccination campaign gave priority access to high-risk medical workers and the critically ill and the elderly people. It began inoculations for people in their 50s this week.

Jeong said while the country is on track to meet its vaccination target, changes to the vaccine shipment schedule may be inevitable due to global supply shortage.

South Korea's vaccination plan appeared to hit a snag on Monday after Moderna told the government that shipments of its vaccine promised to the country would be delayed.

The delayed 1.3 million doses of Moderna vaccine will arrive as early as August 6 and agreement was made on a separate 8.5 million shots for the same month, Prime Minister Kim Boo-kyum told an intra-agency COVID-19.