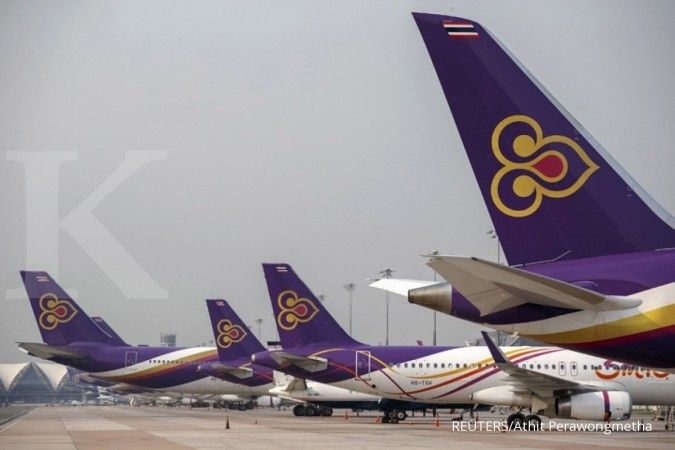 KONTAN.CO.ID - BANGKOK. A group of seven Thai airlines are seeking a combined 5 billion baht ($152.16 million) in low interest loans from the Thai government to help weather the effects of the coronavirus crisis, the Thai Airlines Association said on Wednesday.

The seven airlines had initially requested $770 million in soft loans, but had not received government support.

"We have reduced the request from last year and the 5 billion baht will only cover employment and doesn't include leases, jet fuel and other expenses," Thai Airlines Association president Puttipong Prasarttong-Osoth told reporters.

The latest request was around a fifth of the amount the group had previously sought. Thai government spokesperson Anucha Burapachaisri said all pandemic relief proposals from any business in Thailand would be considered and assessed for viability.

Travel and tourism has collapsed in Thailand due to the pandemic with Thai Airways undergoing business rehabilitation and low cost carrier NokScoot, entering liquidation last year.

Commercial flights to and from Thailand have been banned since last year, leading local airlines to focus on domestic travel to make up for losses.

170 aircraft belonging to the seven airlines have been grounded, and collectively they have been incurring employment expenses of around 900 million baht a month, the association said in a statement.

"We have asked employees to take leave without pay as much as we can. Now we want to maintain employment for the 20,000 industry workers," Puttipong, who is also chief executive of Bangkok Airways Pcl, said, adding that some airlines could undergo downsizing without the loans.