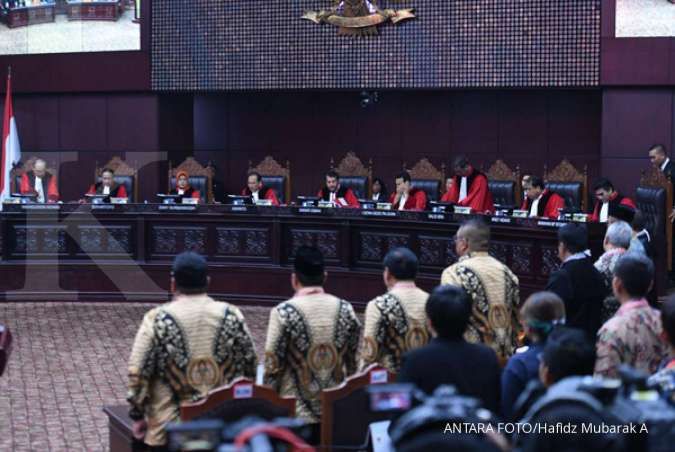 KONTAN.CO.ID - JAKARTA. The Constitutional Court on Thursday rejected the version of the presidential vote tally put forward by the legal team of losing candidate Prabowo Subianto, which was intended to support the claim that the Gerindra Party patron and his running mate Sandiaga Uno had won the April election.

Justice Arief Hidayat called Prabowo’s own vote count — which was included in his petition challenging the officially announced result — “legally baseless” since it lacked evidence to verify it.

In a revised petition, which was read out during the first hearing, the Prabowo-Sandiaga legal team requested that the court declare the pair the winners of the election, arguing that their own tally indicated they got 52 percent of the vote against incumbent Joko “Jokowi” Widodo and Ma’ruf Amin’s 48 percent.

Prabowo’s legal team also attached a table comparing the camp’s own tally to the General Elections Commission’s (KPU) vote count, which had Jokowi winning with 55.5 percent of the vote against Prabowo’s 44.5 percent.

However, Arief said the plaintiffs did not provide any details, starting from the level of the polling stations, proving their allegations that the ballots had been miscounted.

“The plaintiffs cannot prove [their version of the] vote tally was based on legitimate tally forms from all polling stations and therefore the Constitutional Court deems the argument legally baseless,” Arief said.

Prabowo's legal team had also failed to point out errors in the KPU’s vote count and most of the evidence they submitted was only pictures or scanned versions of C1 vote tally forms and not the actual legitimate forms, Arief said.

In its petition, Prabowo's legal team alleged that the April election was marred by “structured, systematic and massive” fraud and accused the KPU of having attempted to rig the election and inflate Jokowi and Ma’ruf’s vote tally by about 22 million votes.