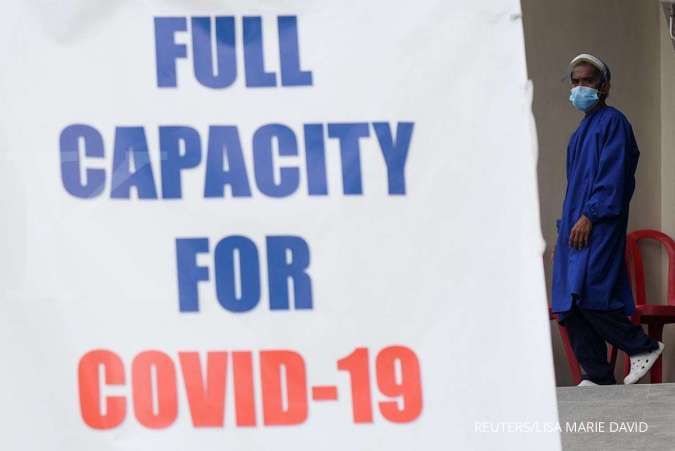 ILUSTRASI. A health worker walks behind a sign outside San Juan de Dios Hospital indicating that its COVID-19 facility is at full capacity, in Philippines

KONTAN.CO.ID - MANILA. The Philippines has detected its first two cases of a coronavirus variant first identified in India, its health ministry said on Tuesday, even as confirmed daily COVID-19 infections fell to a near eight-week low.

The World Health Organization has classified the coronavirus variant, known as B.1.617, as a variant of global concern with some preliminary studies showing that it spreads more easily.

The variant had been confirmed in two Filipino seafarers who returned in April, Alethea De Guzman, director of the ministry's epidemiology bureau, told a news conference

"We need to continually monitor what other variants we may be able to detect locally, as well as monitor the spread of the variants we have already detected," De Guzman said, adding that the seafarers were isolated on their return and had both recovered.

The number of daily infections in the Philippines, which is battling one of the worst outbreaks in Asia, has fallen from a peak of 15,310 on April 2, but has stayed above the daily average of roughly 1,700 cases for 2020.

The drop in cases, if sustained, will buoy hopes that tougher restrictions imposed on March 29 will be relaxed to help the economy, which contracted 4.2% in the first quarter.

In a bid to prevent the entry of variants, the Philippines has temporarily barred travellers coming from India, Pakistan, Sri Lanka, Nepal and Bangladesh from entering the country.

Indonesia and Malaysia this month reported the first cases of the B.1.617 coronavirus variant. The Philippines has also previously recorded cases of a variant first detected in Britain and another first discovered in South Africa, as well as a homegrown P.3 variant.

The Philippines has the second-highest number of COVID-19 cases and casualties in Southeast Asia, next to Indonesia.