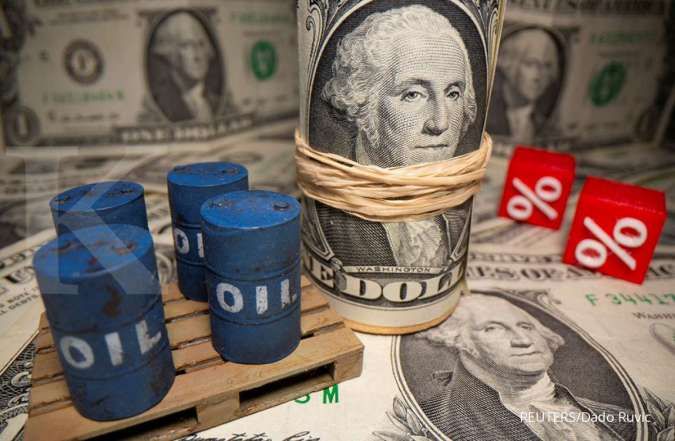 ILUSTRASI. A weaker dollar usually spurs buying of commodities priced in the greenback, like oil.

KONTAN.CO.ID - SINGAPORE. Oil prices rose on Friday on the back of a weaker U.S. dollar, although demand concerns stemming from rising coronavirus cases and escalating U.S.-China tensions kept a cap on prices.

The dollar slid to 22-month lows against a basket of currencies. A weaker dollar usually spurs buying of commodities priced in the greenback, like oil, because they become cheaper for holders of other currencies.

"Crude prices are attempting to stabilize as expectations still remain high that Congress will be successful in delivering another pandemic relief package" for the United States, said Edward Moya, senior market analyst at OANDA in New York.

"Yesterday's U.S. economic data showed that the economic recovery is struggling and pretty much guarantees more federal aid is coming."

The number of Americans filing for unemployment benefits unexpectedly rose to 1.416 million last week for the first time in nearly four months, suggesting U.S. economic recovery is stalling amid a resurgence in COVID-19 cases.

The U.S. economic outlook has darkened in the past month amid renewed lockdowns in some states from surging coronavirus cases, according to economists in a Reuters poll who warned of a high risk the job recovery underway reverses by year-end.

The United States on Thursday recorded over 1,000 deaths from COVID-19, marking the third straight day the nation passed that grim milestone as the pandemic escalates in its southern and western states. Globally, more than 15 million have been infected and over 620,000 have died.

While the rise in infections has fanned fears of renewed government lockdowns, worries that oil demand could be hit have been exacerbated by tensions between the United States and China - the world's top two oil consumers.

China ordered the United States to close its consulate in the city of Chengdu on Friday, in a tit-for-tat response to being told to shut its consulate in Houston earlier this week, as relations between the two world powers deteriorated further.

Relations between Washington and Beijing have deteriorated sharply this year over a range of issues, from trade and technology to the coronavirus, China's territorial claims in the South China Sea and its clampdown on Hong Kong.

In China, congestion at east coast oil ports is adding to costs for shippers and importers even as fuel demand stalls.

Barclays Commodities Research has said oil prices could see a correction in the near term if a recovery in fuel demand slows further, especially in the United States.

The bank lowered its oil market surplus forecast for 2020 to an average 2.5 million barrels-per-day (bpd), from 3.5 million bpd previously.