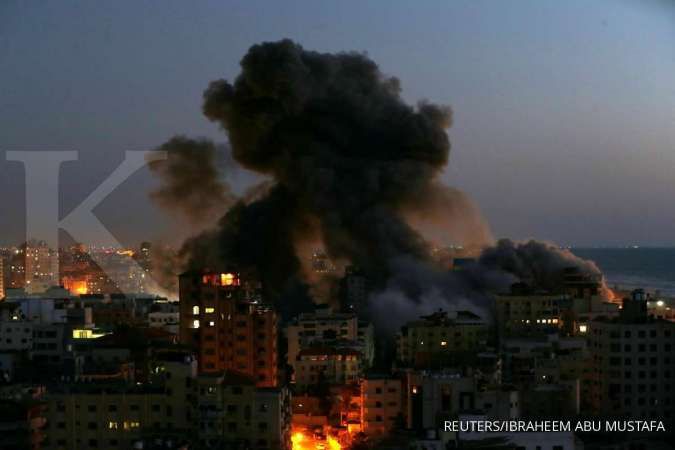 ILUSTRASI. Smoke rises from a building after it was destroyed by Israeli air strikes amid a flare-up of Israeli-Palestinian violence, in Gaza May 11, 2021. REUTERS/Ibraheem Abu Mustafa

KONTAN.CO.ID - KUALA LUMPUR. Malaysia and Indonesia on Saturday called on the United Nations Security Council to intervene and stop Israel's strikes on Gaza, as the conflict between Israeli forces and Palestinian militants raged on.

"We were of similar views that the international community, especially the United Nations Security Council, should act swiftly to cease all forms of violence committed by Israel, and save the lives of Palestinians," Muhyiddin said in a televised address.

"To date, the U.N. Security Council has not issued any statement on the current situation in Palestine due to opposition from the United States of America," he said.

Malaysia has long been a staunch supporter of the Palestinian cause, pushing for a two-state solution based on pre-1967 borders.

The Security Council will publicly discuss the worsening violence on Sunday, diplomats said this week. The 15-member council has met privately this week about the worst hostilities in the region in years, but has so far been unable to agree on a public statement, diplomats said.

At least 136 people, including 34 children and 21 women, have been killed in Gaza since fighting broke out on Monday, according to Palestinian medical officials.

Israel has reported eight dead, including a soldier on the Gaza border and six civilians, two of them children.

In the occupied West Bank, Palestinians have reported 11 killed after protesters and Israeli forces clashed.