Latest on the worldwide spread of the coronavirus 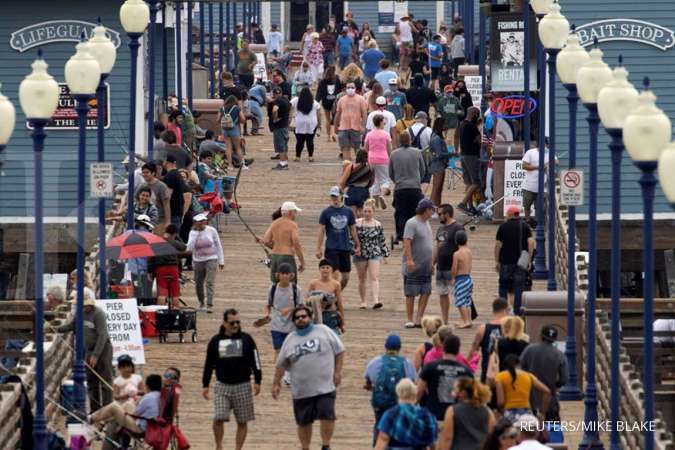 ILUSTRASI. Few people wear masks as they walk on the beach pier during the global outbreak of the coronavirus disease (COVID-19) in Oceanside, California, U.S., June 22, 2020.

KONTAN.CO.ID - JAKARTA. Government experts believe more than 20 million Americans could have contracted the coronavirus, 10 times more than official counts, indicating many people without symptoms have or have had the disease, senior administration officials said.

* More than 9.48 million people have been reported to be infected by the novel coronavirus globally and 482,501​ have died, a Reuters tally showed as of 1600 GMT on Thursday.

* Authorities in Bournemouth, a popular beach town in southern England, declared a "major incident" over what they called the irresponsible behaviour of crowds who had ignored public health guidance on coronavirus and badly overstretched local services.

* France and Germany expressed political and financial backing for the World Health Organization in its fight against the coronavirus, with Berlin saying it would give a record half billion euros in funding and equipment this year.

* The governor of Texas temporarily halted the state's reopening as infections and hospitalizations surged in the state and new daily cases around the country climbed to a near-record high.

* Pregnant women have increased risk of severe COVID-19 compared to women who are not pregnant, the head of the U.S. Centers for Disease Prevention told reporters.

* The United States' Special Representative for Venezuela called on Russia and China to provide more humanitarian aid to their ally Venezuela in its fight against the growing epidemic.

Read Also: Virus-free Vietnam not ready to open doors to foreign tourists yet

* The Philippines' finance secretary said his country needed to prepare in case the economic crisis extends for much longer.

* Authorities in New Delhi worked to convert a spiritual centre into a huge quarantine facility as cases in the Indian capital overtook the financial hub Mumbai for the first time.

* Nigeria's outbreak may push 5 million people into poverty as it triggers the worst recession in the African powerhouse since the 1980s, the World Bank said .

* Prime Minister Benjamin Netanyahu said Israel and the United Arab Emirates would cooperate in the fight against the coronavirus.

* The number of cases in the six Gulf Arab states has doubled in a month to more than 400,000, as the region's two biggest economies this week fully lifted curfews imposed to combat the infection.

Read Also: WHO director for Americas says 226,000 have died of COVID-19 in region

* The European healthcare regulator's endorsement put Gilead's antiviral drug, remdesivir, on track to become the first therapy for the disease on the continent. * Egypt's Eva Pharma said it had begun producing remdesivir and favipiravir, two drugs used to treat COVID-19 patients. * Moderna Inc said it was partnering with contract drugmaker Catalent Inc to prepare an initial 100 million doses of its coronavirus vaccine for the U.S., starting in the third quarter of this year.

* World stocks spluttered to their lowest level in more than a week, amid a surge in U.S. cases and an IMF warning of an almost 5% plunge in the global economy this year.

* The number of Americans filing claims for unemployment benefits fell moderately last week as a second wave of layoffs partially offset hiring by businesses reopening, suggesting the labor market could take years to recover from the pandemic.

* Spain's economy may have shrunk close to 20% in the second quarter from the previous quarter, in what would be the sharpest such decline on record, the Bank of Spain said.