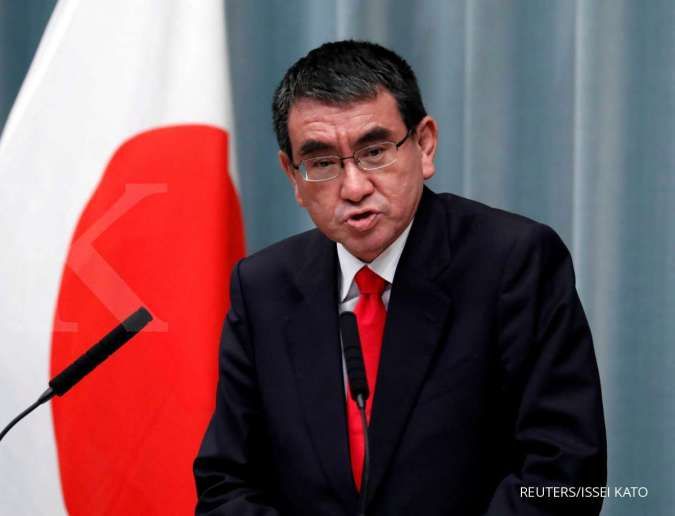 KONTAN.CO.ID - TOKYO. Japanese COVID-19 vaccine minister Taro Kono's chances of becoming the next leader of the ruling party, and subsequently prime minister, were boosted on Tuesday when a rival's party faction splintered.

Japan's Liberal Democratic Party (LDP) will hold a leadership election on Sept. 29, after Prime Minister Yoshihide Suga announced last Friday he was stepping down. The winner of the vote is all but assured to be Japan's next prime minister.

So far only former foreign minister Fumio Kishida has announced his candidacy, but Kono and former internal minister Sanae Takaichi have expressed an ambition to run for the post in recent weeks.

Kono is considering holding a news conference by the end of the week to announce his candidacy, domestic media said.

Following a meeting of former Japanese defence minister Shigeru Ishiba's LDP party faction on Tuesday, lawmaker Mamoru Fukuyama told reporters members were divided about whether to support Ishiba in a leadership vote or back Kono who is from another faction.

Ishiba said last week he was ready to serve as prime minister if the conditions are right. At the faction meeting, he did not say he would not run in the election, Fukuyama said.

Kono and Ishiba regularly come in high in the lists of lawmakers that voters favour as prime minister.

Grass-roots LDP members will vote in the leadership election along with the party's members of parliament, and whoever wins will lead the party to the lower house election that must be held by Nov. 28, making public appeal an important factor in choosing the new leader. read more

On the economic policy front, Kishida has called for a package of more than 30 trillion yen ($273 billion) that will be funded by issuing bonds to cushion the blow from the coronavirus pandemic, a magazine reported.

"We must support the economy with large-scale monetary easing and fiscal stimulus to protect people's lives from the pandemic," he was quoted as saying in an interview by Diamond magazine.

Tokyo's Nikkei share average rallied as much as 1.3%, moving past the psychological barrier of 30,000 at one point for the first time since April, on hopes the LDP will compile additional economic stimulus. read more

"It would not be easy to agree on such talk without taking the actual situation into account. There's no way to comment without knowing on what the 30 trillion yen would be spent on," Aso told reporters after a cabinet meeting.

He questioned how the spending would be used given public works worth 20 trillion yen remained unspent and Japanese firms hoarded a record internal reserves and private sector holds massive financial assets.

Sanae Takaichi, who is also expressing interest in running and has the backing of former prime minister Shinzo Abe, has called for freezing a target for balancing the budget until the BOJ's 2% inflation target is met.