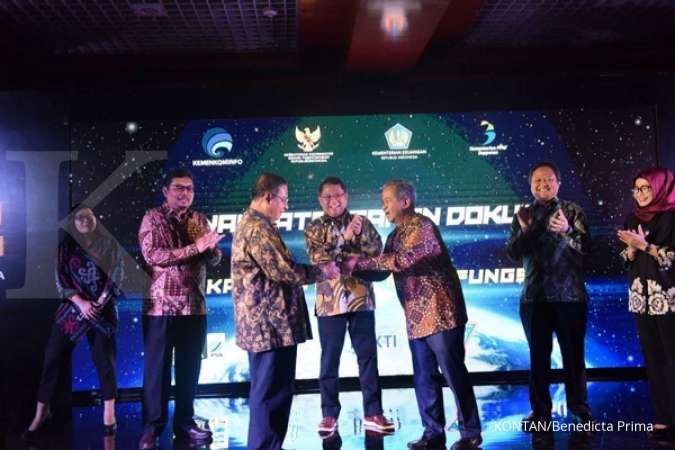 KONTAN.CO.ID - JAKARTA. The government on Friday contracted a French company to build a multifunction satellite that is expected to be put into orbit and begin operations in 2023.

French manufacturer Thales Alenia Space is to start making the satellite, to be called the Satelit Republik Indonesia (SATRIA), in late 2019 and finish by 2022, according to a press release issued by the Communications and Information Ministry.

“I believe the infrastructure development will support the economic activities in society in the next coming years,” Coordinating Economic Minister Darmin Nasution said after a ceremony marking the signing of an agreement for the project at the National Museum in Jakarta.

He said the satellite project was part of the national strategic program set out in Presidential Regulation No 56/2018.

The satellite, designed to have a throughput capacity of 150 billion bits per second (Gbps), is expected to provide internet services to 150,000 public facilities, including schools and health centers, as well as defense establishments, security administrations and all regional government offices all over Indonesia.

Meanwhile, Communications and Information Minister Rudiantara explained that the SATRIA project was an effort by his ministry to improve connectivity to support public services throughout the country, including in frontier, outermost and remote regions.

“Satellite technology has become a solution to address the gap in broadband internet access in Indonesia, an archipelagic country, which has challenging geographical situation,” Rudiantara said in a statement.

He said SATRIA was the fourth internet infrastructure project undertaken by the ministry, following the western, central and eastern Palapa Ring Broadband projects.

Rudiantara added that the government would use the so-called Availability Payment Scheme to repay the investors involved in the project in periodic installments over 15 years. He said SATRIA was an example of involving the private sector in an infrastructure project.