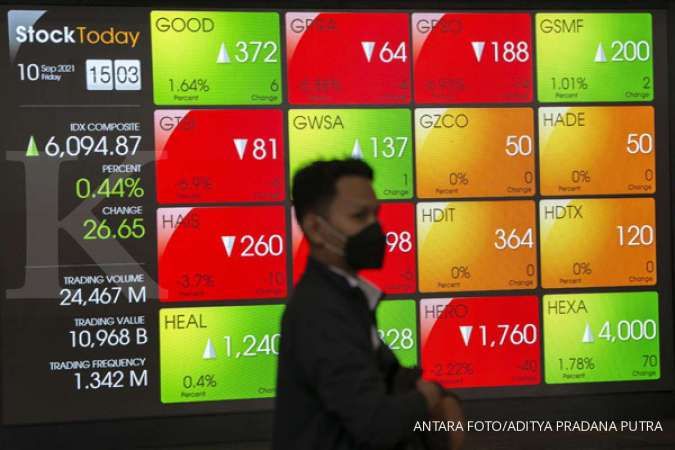 ILUSTRASI. Jakarta's benchmark index trimmed losses to trade 0.3% lower by 0730 GMT and the rupiah was about flat.

KONTAN.CO.ID - INDONESIA ​stocks pared losses on Tuesday after its central bank affirmed growth targets, left interest rates at a record low, and tried to allay fears about the fallout from a potential tapering in stimulus by the U.S. Federal Reserve.

Other equities in the region rebounded from steep losses seen in the previous session, even as worries about the impact of debt troubles at China Evergrande loomed.

Jakarta's benchmark index trimmed losses to trade 0.3% lower by 0730 GMT and the rupiah was about flat.

Favouring an approach that does not pressure the rupiah, Bank Indonesia (BI) said the impact of Fed tapering would not be as severe as that seen during the U.S. central bank's hawkish move in 2013, widely referred to as the "taper tantrum".

BI Governor Perry Warjiyo said the country's low current account deficit also insulated it from a jolt, and backed the economy to grow between 3.5% to 4.3% this year.

Indonesia has been on a tentative path to recovery from the COVID-19 pandemic in recent weeks. It reported on Monday its lowest daily case count since August 2020 and further eased restrictions in Java and on its resort island Bali.

"With inflation below the central bank's 2%-4% target, we expect Governor Warjiyo to have all the necessary space to retain his 'pro-growth' stance to support the recovery," said Nicholas Mapa, a senior economist at Dutch bank ING.

"We believe that BI will keep rates untouched for the balance of 2021 given the current inflation and growth situation."

Stocks in the Philippines and Thailand bounced off multi-week lows, while shares in Singapore recouped some of the near 1% loss incurred in the previous session.

Trading volumes were still slim as markets in China, Taiwan and South Korea were shut, and gains were limited by concerns of Evergrande defaulting on its massive debt pile.

Fears that the crisis could damage an already fragile Chinese economy and spill over into broader financial markets had sent Wall Street sharply lower overnight, though futures pointed to a rebound in U.S. and European markets on Tuesday.

"Equities are showing tentative signs of stabilisation this morning, but Evergrande's situation remains highly volatile, and markets may be enjoying only a short-lived respite before China's markets reopen tomorrow," analysts at Dutch bank ING said.

Most regional currencies inched higher against the U.S. dollar after skidding in recent sessions, while investors held out for updates on Evergrande as well as the Federal Reserve's stimulus tapering before making further bet.