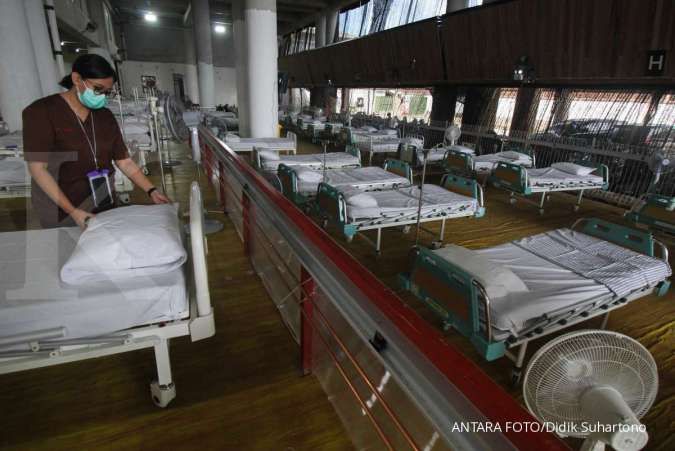 ILUSTRASI. Indonesia struggling to slow virus transmission even after imposing its toughest mobility curbs so far.

KONTAN.CO.ID - JAKARTA. Indonesia is bracing for its COVID-19 outbreak to get worse after a near vertical climb in cases, a senior minister said on Thursday, warning that infections had spread faster than anticipated due to the more virulent Delta variant.

The world's fourth most populous country is struggling to slow virus transmission even after imposing its toughest mobility curbs so far.

Wednesday's tally of more than 54,000 cases was the latest of many peaks in the past month, and up more than tenfold on the number of infections at the start of June.

Hospitals in Indonesia's most populated Java island have been deluged in recent weeks, with many people struggling to get treatment and hundreds dying while self-isolating.

Cases and bed occupancy rates also have risen in parts of Sumatra and Kalimantan and more remote regions like West Papua, where health facilities are less equipped to handle an outbreak.

Luhut also said that vaccine efficacy was weaker against the Delta variant that accounted for most infections on Java island, but urged people to get inoculated to help prevent serious illness and death.

The government was analysing the situation and would decide whether to extend the current emergency coronavirus curbs that will expire on July 20, he said.

In a separate statement, the country's COVID-19 task force said there has been a low adherence to health protocols despite the mobility curbs.