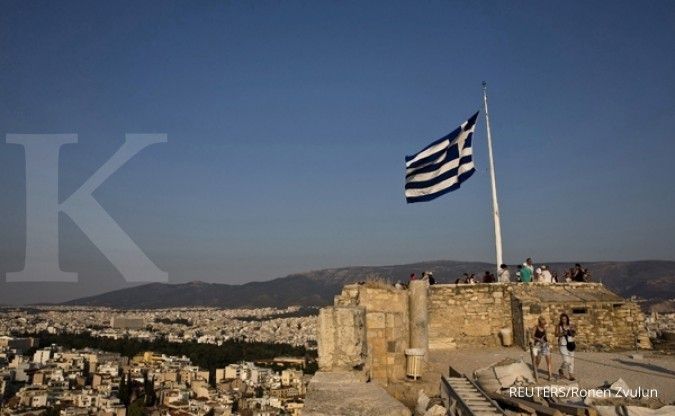 ILUSTRASI. A Greek flag flutters in the wind as tourists visit the archaeological site of the Acropolis hill in Athens, Greece July 26, 2015. REUTERS/Ronen Zvulun/File Photo

KONTAN.CO.ID - ATHENS. Greece formally opened to visitors on Saturday, kicking off a summer season it hopes will resurrect its vital tourism industry battered by the coronavirus pandemic.

After months of lockdown restrictions, Greece also opened its museums and famed archaeological sites, including the ancient Acropolis, this week.

"I feel really alive and good because it has been such a hard and long year because of COVID," said Victoria Sanchez, a 22-year-old student on holiday from the Czech Republic.

"I feel again alive," she said, as she strolled near the Roman Agora in downtown Athens.

As of Saturday, foreign tourists will be allowed in Greece if they have been vaccinated or can show negative COVID-19 test results. Travel between regions, including to the islands, will also be allowed for those with negative tests or vaccinations.

"I'm finally here," said Rebecca, a tourist in Athens from Florida, who declined to give her last name. "I've been waiting two years - two years with the COVID."

Greece has been rolling out vaccines to its islands and hopes to vaccinate most of them by the end of June. The government says vaccines and rapid testing, as well as warmer weather allowing outdoor activities mean visitors can travel safely.

As the pandemic brought international travel to a halt in 2020, Greece suffered its worst year for tourism on record, with 7 million visitors compared with a record 33 million in 2019. Tourist revenues tumbled to 4 billion euros ($4.9 billion) from 18 billion euros.

On the Aegean island of Mykonos, one flight was given a water salute upon landing.

Corfu, in the Ionian sea, welcomed visitors from Germany and France.

"We are so happy. I'm happy to be here," said Pierre-Olivier Garcia, soon after arriving on the island.

Greeks also welcomed the lifting of lockdown measures, with scores of people leaving for the islands or holiday homes on the mainland on Saturday.

"The first weekend of freedom," Alpha TV proclaimed during a broadcast from the busy port of Piraeus.

Greece fared better than much of Europe during the first wave of the pandemic, but rising infections later in 2020 forced it to impose several lockdowns to protect its struggling health system.