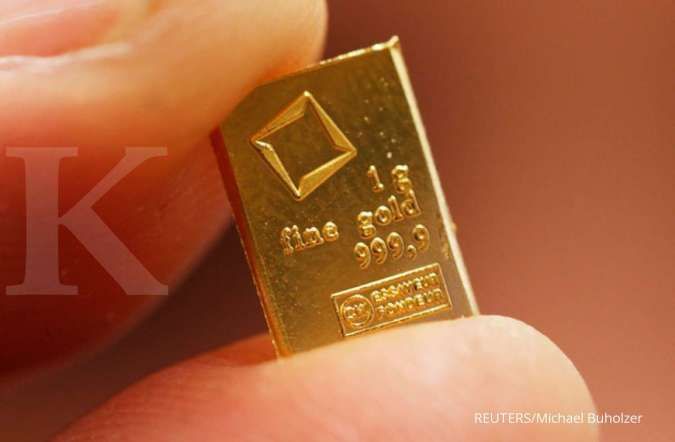 ILUSTRASI. 1 gram piece of a gold

Bullion dropped as much as 1.3% after Moderna said its experimental vaccine was 94.5% effective, but this was less than the more than 5% slump after Pfizer last Monday announced that its vaccine was over 90% effective.

"Vaccine is very very good news, but the problem is it's going to take quite a while to deploy it even in the developed countries," said Bart Melek, head of commodity strategies at TD Securities, adding the market had already adjusted positioning last week on Pfizer's news.

"Vaccine or no vaccine we're going to continue to have a hard time economically well into the third quarter of next year, we're going to need massive amounts of monetary stimulus and we're very likely to get fiscal stimulus, which ultimately should help move inflation closer to target."

Gold, considered a hedge against inflation and currency debasement, has gained 24% this year, mainly benefiting from global stimulus measures to cushion the effect of the pandemic.

Coronavirus cases crossed the 11-million mark in the United States on Sunday.

While markets anticipate a return to normal in the second half of 2021, that "still leaves a massive gap in some of the economies globally that needs to be filled by governments and central banks", said Saxo Bank analyst Ole Hansen.