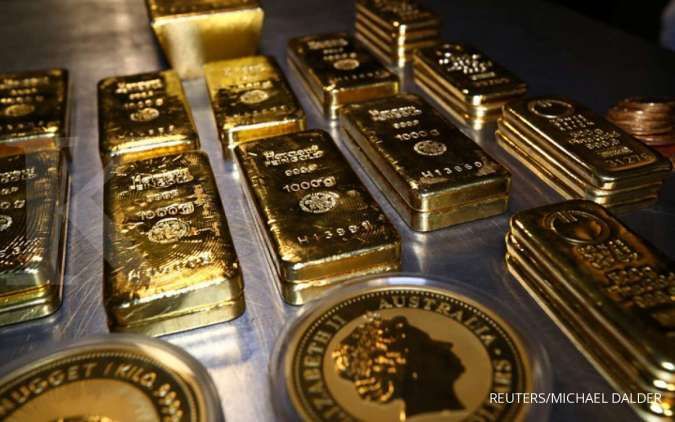 ILUSTRASI. Gold bars and coins are stacked in the safe deposit boxes room of the Pro Aurum gold house in Munich, Germany, August 14, 2019. Gold prices were flat on Tuesday, as investors looked for clues on the status of trade talks with China.

KONTAN.CO.ID - BENGALURU. Gold prices were flat on Tuesday, as investors looked for clues from U.S. President Donald Trump on the status of trade talks with China, while the political unrest in Hong Kong provided some support to the safe-haven metal.

The risk-averse sentiment in the market supported bullion, often seen as an alternative investment during times of political and financial uncertainty. Spot gold was flat at $1,456.01 per ounce, as of 0319 GMT. In the previous session, the yellow metal fell to its lowest in more than three months as upbeat risk sentiment kept U.S. equities close to record levels.

Caution ruled ahead of a speech by Trump to the Economic Club of New York later in the day in case there was any new word on the Sino-U.S. phase-one trade deal.

Last week Chicago Federal Reserve President Charles Evans said that the U.S. economy is in a good place but the path of inflation will be important in deciding the future path of interest rates.

The United States and China had agreed to roll back tariffs on each others' goods as part of the first phase of a trade deal, but Trump denied any such agreement over the weekend.

The months-long trade war and Brexit uncertainty have roiled financial markets and sparked fears of a global economic slowdown, pushing the precious metal more than 13% higher this year.

Britain's Prime Minister Boris Johnson won the most significant boost of the election campaign when Nigel Farage's Brexit Party pulled out of 317 Conservative-held seats in a bid to keep Brexit opponents from controlling the next parliament.

Gold will face a significant resistance at $1,488 level, according to Frappell.

Providing some support to bullion, however, were the Hong Kong protests, where police shot and critically wounded a protester and a man was set on fire on Monday in violence that prompted leader Carrie Lam to denounce "enemies of the people" and drew a chilling warning from a senior Chinese newspaper editor.

The events were an escalation in pro-democracy unrest in the Chinese-ruled territory that has lasted five months.