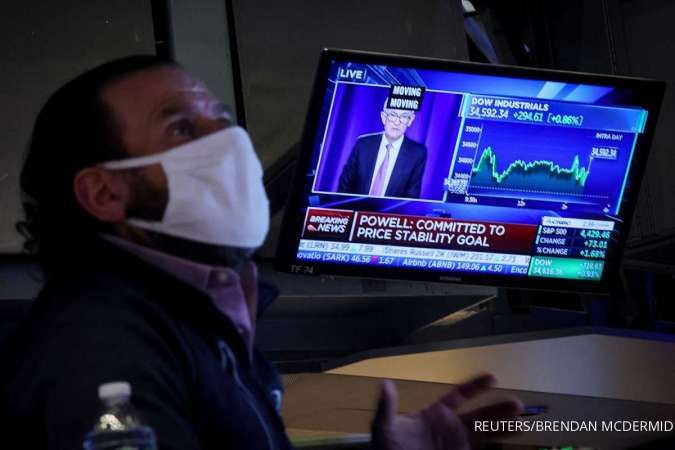 ILUSTRASI. A trader works, as Federal Reserve Chair Jerome Powell is seen delivering remarks on a screen, on the floor of the New York Stock Exchange (NYSE) in New York City, U.S., January 26, 2022.

KONTAN.CO.ID - WASHINGTON. The Federal Reserve raised its benchmark overnight interest rate by three-quarters of a percentage point on Wednesday in an effort to cool the most intense breakout of inflation since the 1980s, with "ongoing increases" in borrowing costs still ahead despite evidence of a slowing economy.

"Inflation remains elevated, reflecting supply and demand imbalances related to the pandemic, higher food and energy prices, and broader price pressures," the rate-setting Federal Open Market Committee said as it lifted the policy rate to a range of between 2.25% and 2.50% in a unanimous vote.

The FOMC added that it remains "highly attentive" to inflation risks.

Read Also: Gold Range-Bound With All Eyes on Fed Verdict

But while jobs gains have remained "robust," officials noted in the new policy statement that "recent indicators of spending and production have softened," a nod to the fact that the aggressive set of rate hikes they have put in place since March are beginning to bite.

Coming on top of a 75-basis-point hike last month and smaller moves in May and March, the Fed has raised its policy rate by a total of 225 basis points this year as it battles a 1980s-level breakout of inflation with 1980s-style monetary policy.

The policy rate is now at the level most Fed officials feel has a neutral economic impact, in effect marking the end of pandemic-era efforts to encourage household and business spending with cheap money.

The latest policy statement gave little explicit guidance about what steps the Fed may take next, a decision that will depend heavily on whether upcoming data shows inflation beginning to slow.

With the most recent data showing consumer prices rising at more than a 9% annual rate, investors expect the U.S. central bank to raise the policy rate by at least half a percentage point at its September meeting.