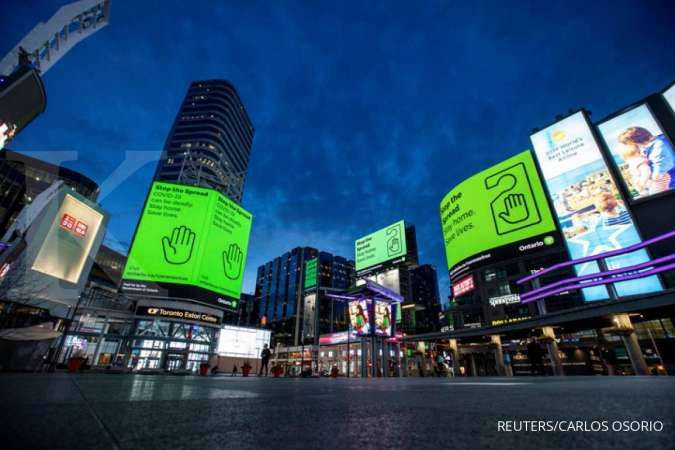 ILUSTRASI. A view of Yonge and Dundas Square, as the number of the coronavirus disease (COVID-19) cases continue to grow in Toronto, Ontario, Canada.

KONTAN.CO.ID - TORONTO. From delayed ambulances to police shortages, Canadian public agencies hit hard by COVID-19 worker absences have cut back on service, rearranged staff or warned the public that emergency responses may be disrupted.

Over the weekend, paramedics in Toronto, Canada's largest city, said there were briefly no ambulances available to respond to emergencies. The city said about 12.8% of its "essential and critical services" staff were off due to COVID-19 as of Monday.

It is not unusual for ambulances to be tied up at any moment, city spokesperson Brad Ross said. But with workers sidelined by COVID-19 and stretched hospitals delaying ambulance offloading, it was becoming more common.

Low-priority calls may be put off and some will go to the fire department, he said.

About 10% of the city's 1,400 paramedics are off work because of COVID-19, down from a peak of about 240 over Christmas, said union chair Mike Merriman. And those left working are "totally defeated. They're totally demoralized. They're exhausted," he said. Where earlier in the pandemic they could be convinced to take on overtime, "they can barely get through their own shifts."

And about 200 of the city's paramedics are part time and lack employer-paid sick leave, Merriman said, which means they may be pressured to work while sick.

Like much of the rest of the world, Canada is swamped by the fast-spreading Omicron variant. Earlier this month Canada broke its previous one-day record for the highest number of people hospitalized with COVID-19, at more than 4,100 nationally.

Ontario regional transit operator Metrolinx cut its service by 15% as 20-30% of its staff were off work due to COVID-19, spokesperson Anne Marie Aikins said.

About 9% of Winnipeg Police Service staff were on sick leave due to COVID-19, and the police service said it had reallocated officers from specialized units such as gang enforcement to street patrol.

The Atlantic city of Halifax canceled bus and ferry trips due to COVID-19 absences.