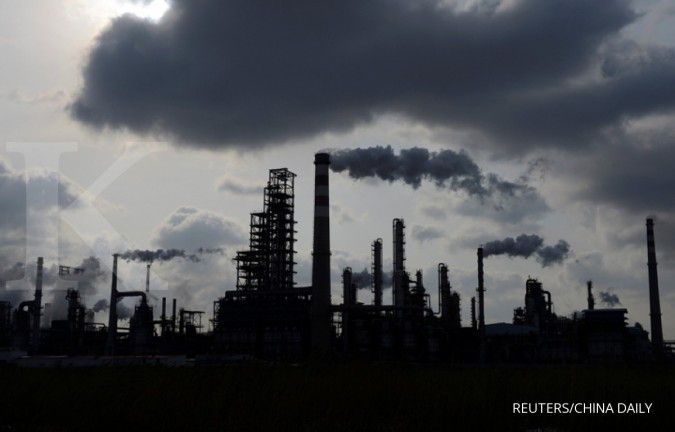 ILUSTRASI. Smoke rises from chimneys at a Sinopec refinery in Qingdao, Shangdong province.

KONTAN.CO.ID - SINGAPORE. China's oil consumption is likely to peak around 2026 at about 16 million barrels per day and that of natural gas by around 2040, according to a top executive of Sinopec Corp.

Sinopec's oil peak forecast echoes a prediction by consultancy Rystad Energy in April that cited rapid adoption of electric vehicles as the main cause for global oil demand to peak over the next five years.

Oil will shift eventually to become a raw material for chemicals rather than fuel, Ma Yongsheng, Sinopec's acting chairman told a seminar in Beijing on Thursday that was confirmed by a company representative on Friday.

The top Asian oil refiner will "forcefully promote" green growth of its refining and petrochemical business and remove inefficient and energy-intensive capacities.

"We will accelerate the transition from oil to chemicals and boost production of high-end materials...and raise lower-carbon feedstocks to cut down the carbon footprint throughput the manufacturing cycle," said Ma.

The firm aims to have its average single refinery's crude processing capacity to reach 10 million tonnes per year, or 200,000 bpd, he added, without giving a comparative figure.

China's natural gas consumption is forecast to peak around 2040, when demand is estimated at 620 billion cubic meters, and it will become China's top fossil fuel resource around 2050, Ma said.

China sees natural gas a key bridge fuel that is going to expand steadily in demand for the next two decades.