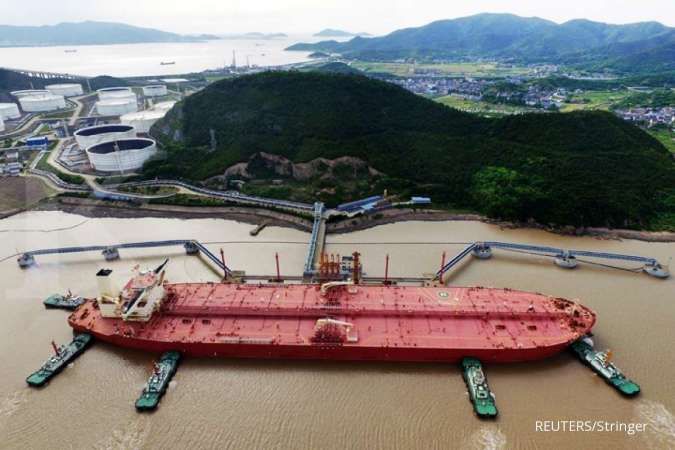 ILUSTRASI. FILE PHOTO: A VLCC oil tanker is seen at a crude oil terminal in Ningbo Zhoushan port, Zhejiang province, China May 16, 2017. REUTERS/Stringer/File Photo ATTENTION EDITORS - THIS IMAGE WAS PROVIDED BY A THIRD PARTY. CHINA OUT. GLOBAL BUSINESS WEEK AHEAD

KONTAN.CO.ID - SINGAPORE. China has lifted its crude oil import quotas to allow mostly private refiners to bring in a further 12.9 million tonnes this year, a document seen by Reuters showed on Tuesday, feeding a new generation of huge refineries.

The third batch of quotas was allocated to 19 companies, including private refiner Zhejiang Petroleum & Chemical Co (ZPC), which was awarded 3.5 million tonnes, the document showed.

Prior to this, China had issued a crude import quota of 153.1 million tonnes, according to Huatai Futures Co, bringing total allowed imports so far this year to 166 million tonnes, a Reuters calculation showed.

"The new increase in import quotas is mainly for the newly launched mega-refineries."

Read Also: China says will work with the U.S. to address each other's core concerns

China imported 369 million tonnes of crude oil in the first nine months of 2019, up nearly 10% from the same period last year, customs data showed, boosted by the startup of new refineries as well as strong fuel demand in the country.

In addition to independent oil processors - known as 'teapots' - mostly based in the eastern province of Shandong, provincial government-backed Shaanxi Yanchang Petroleum Group was also granted another 900,000 tonnes in the latest batch of quotas.

That brought its total allocation this year to 3.6 million tonnes.

China's Ministry of Commerce did not respond to a request for comment.

"Some crude import quotas will be left unused, the same as previous years. Some teapots will not be able to finish their quotas, either because they have credit problems or because they prefer domestic trades," Huatai's Pan said.

"This year in the first half margin was poor, especially for gasoline. Although margins recovered in the second half, it is still worse than previous years as the market is competitive and refined oil products are in oversupply."