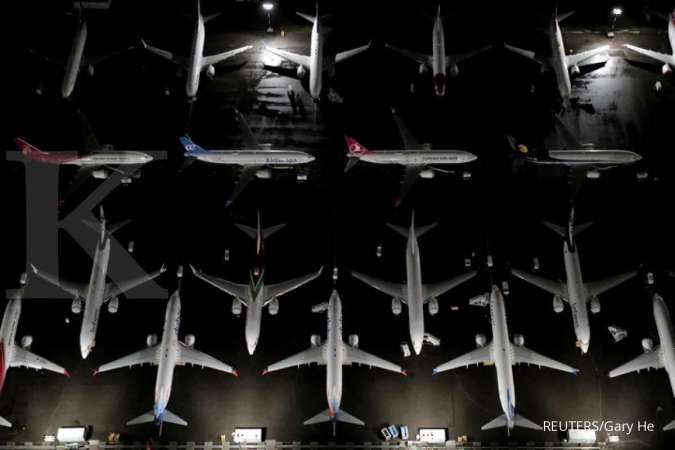 KONTAN.CO.ID - SEATTLE. Boeing Co will need to borrow more money over the next six months and does not expect to pay dividends again for years, as the U.S. planemaker wrestles with industry fallout from the coronavirus and the grounding of its 737 MAX jet, chief executive Dave Calhoun told shareholders on Monday.

“We know we’re going to have to borrow more money in the next six months in order to get through this really difficult moment, to provide the right liquidity to the supply chain that represents our industry,” Calhoun said during the company’s virtual annual general meeting.

“Our first priority is going to be to pay that back, the principle and the interest that goes with it.”

Boeing would continue ordering parts and services from its suppliers to ensure the smaller companies have enough business to keep them afloat during the downturn, he said.

“We have to keep that flow of money going to the supply chain so that they have some predictability around how they operate.”

Boeing is trying to bring its 737 MAX jet back into service after two fatal crashes, even as the aviation industry slumps because of the coronavirus, which has dried up demand for passenger air travel.

Calhoun said Boeing expects it will take two to three years for travel to return to 2019 levels and an additional few years more for the industry’s long-term trend growth to return.

Calhoun warned shareholders he is not confident Boeing will resume paying dividends in the medium-term.

“That process could take three to five years... It’s going to be a while before dividends come back.”

The largest U.S. planemaker, which reports first-quarter earnings Wednesday, last month drew down its entire $13.8 billion credit line and suspended its dividend. Boeing’s first- quarter deliveries were a third of the 149 seen a year earlier and the lowest since 1984 for the first quarter.

Earlier in the meeting, Calhoun said the company’s negotiation for Embraer’s regional jet-making division was no longer helpful.

“We worked diligently for two years to finalize the transaction, but ultimately we could not come to a resolution around critical unsatisfied conditions for the deal,” he said.

Boeing said it was confident of its legal right to terminate the agreement.

Industry sources have said Boeing was interested in Embraer mainly for access to lower-cost engineers and new manufacturing options, but it is now pondering cutting 10% of its workforce while also seeking U.S. federal help for the aerospace sector.

Boeing in March called for a “minimum of $60 billion in access to public and private liquidity, including loan guarantees, for the aerospace manufacturing industry.” The company has not said if it will seek government loans or tap a $17 billion fund for national security-related companies.

Boeing also said on Monday it will resume 787 production in South Carolina next week after it resumed commercial airplane production last week in Washington state.

On Monday, shareholders also narrowly approved a measure backing a policy requiring an independent board chairman. Boeing has had a separate chairman and chief executive since October.

Boeing said each of the company’s 12 board nominees received a majority of votes from shareholders, though five directors got a significant number of no votes.

Two proxy advisers, Glass Lewis and Institutional Shareholder Services (ISS), had recommended that Boeing shareholders vote against key board members to show objections to the company’s handling of the 737 MAX crisis.

Calhoun did not repeat the company’s long-standing timetable of a mid-year return to service approval by regulators for the 737 MAX that has been grounded since March 2019 after two crashes killed 346 people. Reuters reported last week a key certification test flight may not occur until late May or later. “We remain confident in the MAX,” Calhoun said.