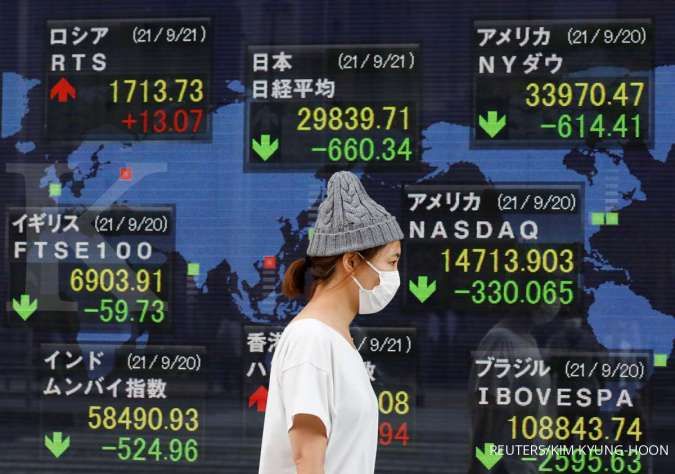 ILUSTRASI. Asian shares got off to a cautious start on Monday as a jump in oil prices

KONTAN.CO.ID -  SYDNEY. Asian shares got off to a cautious start on Monday as a jump in oil prices to three-year highs could inflame inflation fears and aggravate the recent hawkish turn by some major central banks.

Oil pushed past its July peaks as global output disruptions forced energy companies to pull large amounts of crude out of inventories, while a shortage of natural gas in Europe pushed costs up across the continent.

"We forecast that this rally will continue, with our year-end Brent forecast of $90/bbl vs. $80/bbl previously," wrote analysts at Goldman Sachs in a client note.

"The current global oil supply-demand deficit is larger than we expected, with the recovery in global demand from the Delta impact even faster than our above consensus forecast."

Such an increase could stoke speculation that global inflation will prove longer-lasting than first hoped and hasten the end of super-cheap money, favouring reflation trades in bank and energy stocks while bruising bond prices.

MSCI's broadest index of Asia-Pacific shares outside Japan was flat, after three consecutive weeks of loss.

Japan's Nikkei gained 0.4% on hopes for further fiscal stimulus once a new prime minister is chosen.

The fate of China Evergrande Group remained a major unknown after the property giant missed a payment on offshore bonds last week, with further payment due this week.

Stocks in Hong Kong have felt the most pressure, though the government in Beijing did add more liquidity to the financial system.

"We expect policymakers in China to allow deleveraging of property sector debt to take hold with an eye to reducing moral hazard, but are confident that they will actively manage the restructuring and effectively limit financial spillovers," said analysts at JPMorgan in a note.

Eyes will also be on U.S. fiscal policy with the House of Representatives due to vote on a $1 trillion infrastructure bill this week, while a Sept. 30 deadline on funding federal agencies could force the second partial government shutdown in three years.

The week is packed with U.S. Federal Reserve speeches led by Chair Jerome Powell on Tuesday and Wednesday, with more than a dozen other events on the calendar.

The 10-year Treasury is at its highest since early July at 1.46% amid talk the reflation trade could be back on as the world braces for the end of super-cheap money.

The lift in yields underpinned the U.S. dollar, particularly against emerging market currencies which compete with Treasuries for global funds.

It even made some ground on the yen to reach a major chart barrier at 110.79. A break of that would take the currency to territory not visited since early July.

The euro was steady at $1.1719 as investors pondered the implications of a German government led by the centre-left Social Democrats after a narrow victory in Sunday's election.

The Social Democrats claimed a "clear mandate" to lead a government for the first time since 2005, ending 16 years of conservative-led rule under Angela Merkel.

"The likelihood of a political shift to the left suggests Germany's fiscal stance could become less of a drag on the economy over the next few years than is currently projected," said analysts at CBA in a note. "This would ultimately benefit the euro."