A year in office, Anies gets mixed reviews 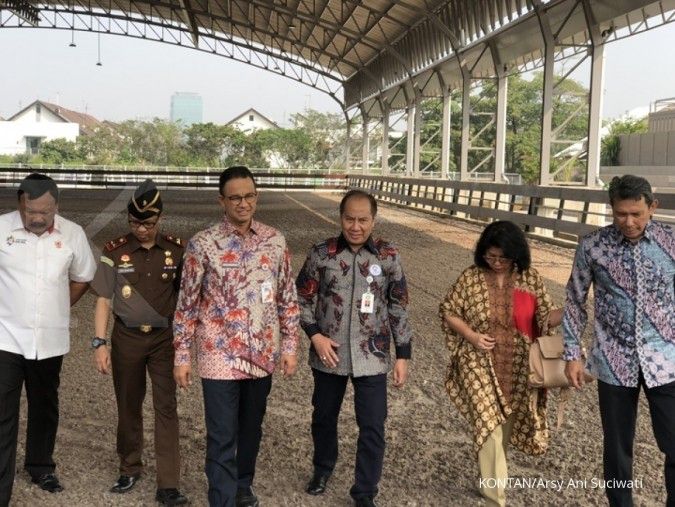 KONTAN.CO.ID - JAKARTA. Serving for almost a year as governor, Anies Baswedan and his administration has been applauded by the city’s urban poor groups for involving them more in policies that affect them, but critics have questioned the effectiveness of his programs.

In their joint statements read out to the public in Kampung Rawa, Kebon Jeruk, West Jakarta on Sunday, they pointed out Anies’ village revitalization programs; establishment of pedicab waiting areas in Teluk Gong, North Jakarta, as well as mapping their operational routes in 16 areas; and guaranteeing security for KOPEKA vendors who operate inside Ancol Dreamland Park.

For the kampung revitalization programs, Anies issued Gubernatorial Decree No. 878/2018 on village management that listed up to 21 city villages to be rehabilitated by the administration, 15 of which have had their community action plans (CAP) prepared since May.

Anies for example had built the waiting areas in Kampung Kunir and Kampung Akuarium, two of the villages, whose residents were evicted in 2015 and 2016 respectively, while their villages are rebuilt according to the residents’ aspirations outlined in their CAP.

JMRK coordinator Eny Rochayati said the group was satisfied with Anies’ tenure as governor, but sometimes the working units (SKPD) might not in sync with Anies.

She said the administration had been trying to generate ideas from the residents themselves, although they were hindered by lower levels of bureaucracy.

She said those officials were used to top-down bureaucracy.

“Now we are encouraging to switch to a bottom-up model,” Eny said.

Jakarta Governor Anies Baswedan who attended the event said he appreciated the acknowledgement by the urban poor groups, adding that his administration wanted to rehabilitate city villages together with their
residents.

“We have achieved several things, although we’re not finished yet as it has only been a year. This is a good start. In the future, we will do everything that we have committed to one by one,” Anies said.

However, not all agree with the groups.

An urbanist from Trisakti University, Yayat Supriatna, said the administration’s flagship programs, such as the zero-rupiah down payment program, OK Otrip rebrand, city village rehabilitation or river naturalization project were still up in the air without concrete policies.

He said the governor should speed things up and implement clear-cut policies, such as on the village rehabilitation program that he thought takes too long a process because of the multiple teams that work on them.